Pudong Expo Area, covering some ground of 25 square kilometers, is located at the core waterfront area in Shanghai. It is adjacent to Lujiazui area and faces Xuhui Riverside across Huangpu river. It is designed to become a world-level Central Activity Zone with priority on developing headquarters economy, innovation-oriented service economy and cultural industry, and a livable urban area featuring city and industry integration.

As a part of the China (Shanghai) Pilot Free Trade Zone (SHFTZ), Lujiazui Financial and Trade Zone covers an area of 24.39 square kilometers. It is surrounded by Huangpu River, the mother river of Shanghai, Longyang Road, Jinxiu Road and Luoshan Road.

Lujiazui area has China's most complete financial market system, financial infrastructure, and financial ecological environment, providing an important platform for the settlement of financial institutions, the gathering of financial talents, and active financial transactions. Lujiazui area further plays its role as a core functional zone for Shanghai World Financial Center (SWFC) as the State Council approved to incorporate it into the SHFTZ.

With the increasing global use of the RMB, more and more domestic and foreign financial institutions dealing with the innovation, pricing, transactions, and liquidation of renminbi products are attracted to relocate in Lujiazui. Lujiazui is home to a total of 734 licensed financial institutions, including 214 banks firms , 320 securities firms and 200 insurance firms, accounting for 60 percent and 90 percent of that of the whole Shanghai and Pudong New Area respectively. It's also home to more than 1,500 non-banking financial institutions, more than ten factor markets of various types, more than 300 headquarters, and 87 regional headquarters of multinational companies. The area has 1,078 shipping institutions, among which 863 are shipping service providers, forming a relatively complete market system for finance and shipping.

As a major component of the SHFTZ, Lujiazui will learn from the advanced experience of global financial areas, such as the world's most open and influential Wall Street in New York and the City of London, and it will establish a financial system which conforms to international rules, and institutional arrangements that are conducive to the development of the modern service industry, such as the headquarters economy. The zone will continue to promote investment facilitation, trade liberalization, financial globalization, and innovation in financial regulatory system. It will work harder in create a fair, unified and efficient business environment which is market and law-based and open to the world. It will strive to build itself into a main area for SWFC, a high-end service area for Shanghai International Shipping Center and a concentration area for Shanghai International Trade Center.

Information for the SHFTZ Administrative Service Center in Lujiazui Area 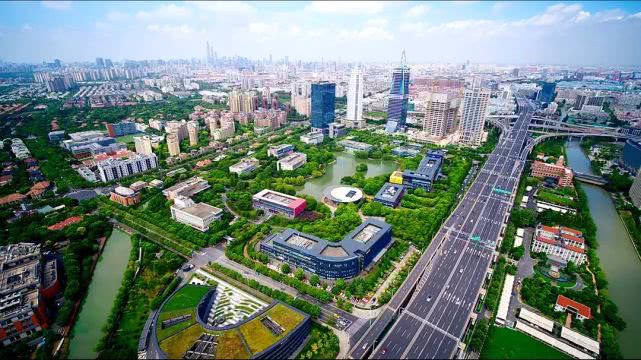 Jinqiao Economic and Technological Development Zone in Pudong New Area, Shanghai is approved for establishment by the State Council in 1990. [Photo/Wechat account: pdnews]

Jinqiao Economic and Technological Development Zone in Pudong New Area, Shanghai, was approved for establishment by the State Council in 1990. It has a planned area of 20.48 square kilometers, stretching to the Outer-ring Road Green Belt in the east, East Jinxiu Road in the south, Yanggao Road in the west, and Jufeng Road in the north.

The zone is the country's only pilot free trade zone focusing on a dual-core strategy and featuring advanced manufacturing and producer services, as well as a key part of Shanghai's mission to build a scientific and technological innovation center with global influence.

According to statistics, Jinqiao Economic and Technological Development Zone, which only covers 2 percent of land in Pudong, has contributed to 25 percent of Pudong's industrial economy scale, among which the output value of the automotive industry in the zone accounts for 50 percent of Shanghai's total.

In 2018, the zone generated a total output value of more than 243.6 billion yuan ($34.14 billion), and its business income totaled 726.22 billion yuan, making the zone a leading advanced manufacturing base in Shanghai.

Equipped with a solid foundation for advanced manufacturing, Jinqiao zone will step up efforts to promote the development of smart manufacturing using artificial intelligence (AI) and aiming to establish a professional, comprehensive and superior industrial layout of AI industry.

Traditional industries in the zone will be upgraded, and an "AI plus" characteristic industrial layout will be formed in the zone, aiming to create a new growth engine for the zone's competitive industries such as advanced manufacturing, finance and shipping.

Zhangjiang Science City, formerly known as Zhangjiang High-Tech Park, began operations in July 1992, at the time covering an area of 17 square kilometers. It was among the first wave of national new zones.

In 1999, Shanghai initiated its "focus on Zhangjiang" strategy, boosting the development of the park to a new phase.

In 2000, Shanghai and Pudong New Area co-established the leading team and office for the high-tech park. The planned area of the park was readjusted to be 25.9 square kilometers.

In May 2007, the management committee of the Zhangjiang High-Tech Park was founded.

In February 2016, the National Development and Reform Commission and the Ministry of Science and Technology approved construction of the Zhangjiang National Comprehensive Science Center.

In July 2017, the Shanghai government approved of the plan to turn Zhangjiang Sci-Tech Park into Zhangjiang Science City, which would cover an area of 95 square kilometers.

In May 2018, the management committee of Zhangjiang High-Tech Park was renamed the office for construction and management of Shanghai Zhangjiang Science City.

Zhangjiang Park is located in the center of Pudong New Area, adjacent to Lujiazui Financial and Trade Zone and Shanghai Disneyland. It’s a 15-minute drive from Shanghai Pudong International Airport. The park is adjacent to the Inner Ring Road of Shanghai and is located in the major trafic arteries such as the Central Ring Road, Outer Ring Road, Luoshan Road, and Longdong Avenue. The metro network in Zhangjiang Park consists of three horizontal lines and two vertical ones, including the Metro Line 2, and the Metro line 11, 13, 18 and 21 that are under construction and a Disneyland feeder line.

Zhangjiang Science City is currently home to over 18,000 enterprises, 53 regional headquarters of multinational corporations, and 828 high-tech enterprises. Its leading industries include information technology and biomedicine.

Information Technology (IT) Industry: The city has the most complete integrated circuit industrial chain in the country, with several internationally renowned companies working in the field. Six of the top 10 global chip design companies have set up regional headquarters and research and development (R&D) centers in Zhangjiang, while three of the top 10 chip design companies in China are located in the area.

Bio-pharmaceutical Industry: A complete innovation chain has been formed in the city, including new drug development, drug screening, clinical research, pilot plant scale-up, registration and certification, and mass-marketing. The city is now home to more than 400 bio-pharmaceutical companies, over 20 large companies focusing on production of medicine, over 300 small and medium-sized companies focusing on pharmaceutical research, over 40 CRO companies and over 100 research institutes. The city has become one of Shanghai’s most important manufacturing bases for high-end medical facilities. The city’s market share in microport equipment ranks No 1 in China. The city has introduced many high-caliber medical, medical testing and nursing institutions. Seven out of the top 10 pharmaceutical companies in the world have set up regional headquarters and R&D centers in Zhangjiang.

Innovation resources continue to converge in Zhangjiang. The city is home to 440 R&D institutions at the national, municipal, and district levels, and to a number of major scientific research platforms such as the Shanghai Synchrotron Radiation Facility, Shanghai Supercomputer Center, Shanghai Aircraft Design and Research Institute of COMAC and Zhangjiang Medicine Valley Public Service Platform. It also has nearly 20 universities and research institutes, such as Shanghai University of Science and Technology, Shanghai Advanced Research Institute of Chinese Academy of Sciences, Shanghai University of Traditional Chinese Medicine, Fudan University Zhangjiang Campus, providing research results, technical support, and talent for the development of enterprises in the park.

High-level talent continues to flow in. There are nearly 370,000 employees in Zhangjiang. More than 6,200 employees have a PhD degree and nearly 50,000 have a master's degree. The city has around 7,500 overseas returnees, 4,300 foreigners and more than 450 high-caliber professionals.

The city excels in its entrepreneurship and innovation environment. It currently has 86 incubators and more than 2,600 companies under incubation. The incubation area covers 600,000 square meters.

The overall environment continues to improve. Public transport infrastructure such as the metro, buses, and trams continues to improve. The city has built such business areas as Legend Square, Changtai Plaza, and Huizhi Life Center, renovated the 40,000-square-meter Nobel Lake Park, and built the Zhangjiang Sports Leisure Center. The city strives to create a comprehensive environment for development with convenient living facilities, a beautiful environment, good services and a comfortable life.

Waigaoqiao Free Trade Zone, the first bonded area in China, is founded in June 1990 upon the approval of the State Council. Occupying some ground of 10 square kilometers, it has developed into a special area with large economic scale and complete business functions that is under the supervision of Shanghai Customs. As the the first "National Promotion and Innovation Demonstration Area of Import and Export Trade" in China, the zone is a trade platform for ten major fields – alcohol, clocks and watches, automobile, construction machinery, machine tools, medical equipment, biological medicine, health product, cosmetics, and cultural products. It is also designated as China first "National Base for International Cultural Trade" by National Culture and Tourism of the People's Republic of China.

Waigaoqiao Free Trade Logistics Park, the first bonded logistics park, is founded in December 2003 upon the approval of the State Council. It occupies some ground of 1.03 square kilometers. As the first pilot zone-port interactive area, it can both enjoy the sea transportation resources of Shanghai Port and the preferential policies for bonded area and export processing zone. Supported by Waigaoqiao Free Trade Zone, it is a major base for the development of modern international logistics industry.

Yangshan Free Trade Port Area, the first bonded port in China, is founded in June 2005 upon the approval from the State Council. Occupying some ground of 14.16 square kilometers, the area is comprised of Little Yangshan Port area, land area and the Donghai Bridge that links them together. Acting as an integration of port and bonded area, the area is the major undertaker of Shanghai international shipping. It is home to the distribution centers for electronic products, vehicles and auto parts, luxury food, and brand clothing. It has developed into a distribution base for Europe and the United States, an industrial base of staple commodity, an import trade base for domestic market, and a gathering place for leading shipping enterprises.

Pudong Airport Free Trade Zone, occupying some ground of 3.59 square kilometers, is founded upon the approval the State Council in July 2009. It undertakes the functions of bonded logistics and airport freight transportation and acts as a pioneering area for airport service industries. It is home to the distribution centers for well-known multinational corporations that deal with electronic products, medical equipment, and luxury customer goods. Hundreds of financing and lease projects, worldwide express package service companies UPS, DHL and FedEx, and a batch of functional projects also operate in the zone. An industry chain covering the fields of air distribution center of Asian-Pacific region, financing and lease, express transshipment center, sales exhibition of luxury customer goods is also established in the zone. 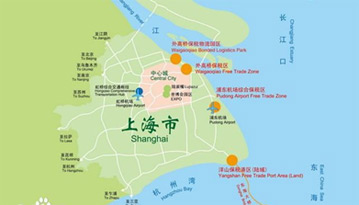