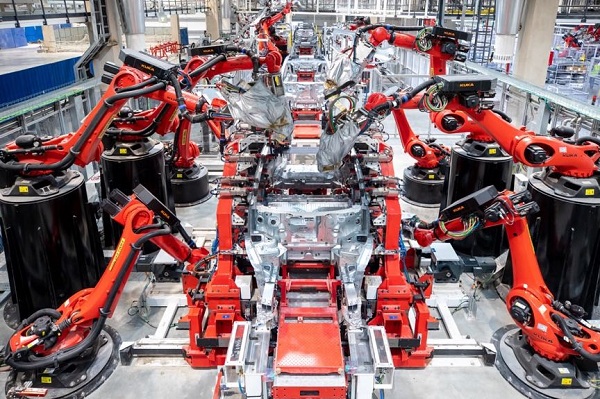 Tesla resumes production at its Shanghai plant on April 19, 2022. [Photo provided to chinadaily.com.cn]

Machines have started to buzz again at carmakers including Tesla and Volkswagen in China after a hiatus of weeks because of COVID-19 outbreaks in the country's two major vehicle-producing cities.

Shanghai and Changchun, Jilin province, produce one out of every five vehicles sold in the country, while suppliers in the two cities provide parts to manufacturers across the country, according to the China Passenger Car Association.

Since Sunday, over 8,000 employees had returned to Tesla's plant in Shanghai, the US electric carmaker said on Tuesday.

"We are ramping up the output over the next three to four days to resume one-shift production," said Song Gang, a senior director of manufacturing at Tesla's Shanghai factory.

Tesla is one of 231 companies in the automotive industry that local authorities in Shanghai authorized to resume operations and production in a notice released on Saturday.

Roy Lu, an independent auto analyst in Shanghai, said the resumption of production will greatly buffer the impact of the pandemic on China's automotive market, where production fell 11 percent and sales declined by 9 percent in March from the same month last year.

Lu said the authorities' decision to restart work at those plants "came earlier than expected", but added that it will still take some time for the whole industry to return to normal.

China's largest carmaker SAIC Motor, which is also a partner of General Motors and Volkswagen, began stress tests at its plants in Shanghai on Monday, with the first vehicle rolling off the restarted assembly line on Tuesday.

SAIC said it will draw up a work plan based on a comprehensive evaluation of the test results and the local situation regarding the virus.

Volkswagen said on Wednesday that it is evaluating the feasibility of resuming production at the SAIC Volkswagen plant in Anting of Shanghai's Jiading district.

A spokesperson for German auto supplier ZF said, "With the support of the Shanghai government and our customers, we are proceeding smoothly in terms of work resumption applications."

He added that the authorities have also issued permits to facilitate its transports.

Zhang Xiang, a researcher at the North China University of Technology, said there are around 1,000 companies in the auto industry in Shanghai, and smooth logistics is crucial for them to ensure production as they need to ship in raw materials and ship out products.

Production resumed several days earlier in Changchun, where Toyota and Volkswagen have joint ventures with China's FAW Group. Production at those plants had been halted on March 14.

Toyota said preparations started late last week to resume work at the Jilin plant, but it has yet to decide when it would return to full-scale operations.

Volkswagen said that the FAW-Volkswagen plants in Changchun, which produce Volkswagen and Audi cars, restarted operations on Monday.

The joint venture's production had been slashed by 60 percent in March due to COVID. It said the plants in Changchun account for 40 percent of its total production capacity in China.

As of Monday, 37,600 employees had returned to their posts at FAW and its joint ventures, Xinhua News Agency reported.

Earlier this year, the China Association of Automobile Manufacturers estimated vehicle sales would reach 27.5 million this year, up 5.4 percent from 2021. It has not revised the estimates so far.