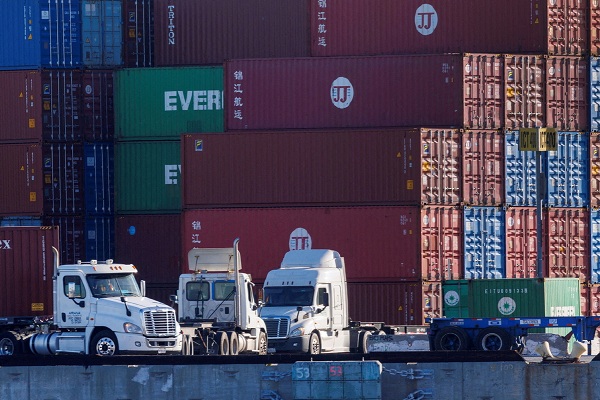 Trucks arrive to pick up containers at the Port of Los Angeles in Los Angeles, California, November 22, 2021. [Photo/Agencies]

Los Angeles and Shanghai are working together to help reduce greenhouse gas emissions from cargo traffic between their ports — the largest in the US and China.

The initiative, dubbed the "first of its kind green shipping corridor", is a recently announced partnership between the ports of the two cities and other stakeholders in the industry that aims to shift to zero-carbon fueled ships by 2030 and reduce emissions from port operations, among other goals.

"We are just getting started on this important work, but by convening international coalitions of key goods-movement stakeholders such as cities, ports, shipping lines and cargo owners, we hope this ground-breaking green shipping corridor initiative will catalyze action on a global scale," Alisa Kreynes, green ports program manager at C40 Cities, told China Daily.

The initiative was made possible by Los Angeles Mayor Eric Garcetti, who launched the C40 Green Ports Forum while serving as the chair of C40, a network of mayors from leading cities around the world, she said.

The global shipping industry depends heavily on fossil fuel oil and is responsible for 3 percent of global emissions annually. It has come under increasing pressure to reduce its greenhouse gas emissions.

To keep global warming below 1.5 degree Celsius, an ambitious target set by the Paris Agreement, Kreynes said it is important to decarbonize the shipping sector, especially along major routes such as the Trans-Pacific corridor, where ships moved 21 percent of the world's total container volume in 2020.

"For the past 20 years, the Port of Los Angeles has been the busiest container port in the Western Hemisphere; its top trading partner is China in terms of cargo volume. In terms of container throughput, the Port of Shanghai is the world's largest port," Kreynes said.

Ken Alex, director of ProjectClimate at UC Berkeley's Center for Law, Energy and the Environment, said it is "encouraging" to see two of the world's largest ports work collaboratively to accelerate the transition to zero emission fuels and reduce greenhouse gas emissions.

"It is of particular note that Shanghai and Los Angeles will develop best management practices which can be used by other large ports around the world," he told China Daily.

According to Alex, shipping emissions from ports account for an estimated 18 million tons of carbon dioxide annually and are on a trajectory to increase fourfold by 2050. Therefore, a concerted effort to reduce those emissions by two major ports is a positive development, he said.

"US-China climate change collaboration can be significantly enhanced through subnational cooperation, such as state-province agreements and pilots, city-to-city exchange and port-to-port partnerships, such as the LA-Shanghai Trans-Pacific Green Shipping Corridor. These efforts benefit all," Alex said.

Ingrid Irigoyen, director of the Aspen Institute's Shipping Decarbonization Initiative, a participating partner in the plan, told China Daily that the hope is for this collaboration to bring together private and public sectors to create "enabling conditions" for emissions reduction and new technologies that "offer a pathway to commercially viable zero-emission shipping".

"We also look forward to this partnership inspiring confidence among policymakers around the world to provide strong support for the transition to zero-emission fuels and technologies," Irigoyen added.

Phillip Sanfield, a spokesperson for the Port of Los Angeles, said it has enjoyed a "long-standing relationship" with the Port of Shanghai.

"It's important for these two ports to send a signal to the rest of the world that reducing gas emissions in the maritime industry is critically important," he told China Daily.

Noting that the two ports and C40 Cities will work out details for the plan over the course of this year, Sanfield said more information about it will be shared in the coming months.

"The Port of Los Angeles and our counterparts in Shanghai have worked together on other environmental initiatives over the years. Sharing best practices and offering assistance is something we value very much," he said.

A "green shipping corridor implementation plan" for the initiative is expected to be developed by the end of 2022, according to partnership officials. Some key goals of the partnership include the phasing in of low, ultralow and zero-carbon fueled ships through the 2020s; development of practices to reduce emissions for ships using the corridor; reduction of supply chain emissions and improving air quality in the ports and adjacent communities.