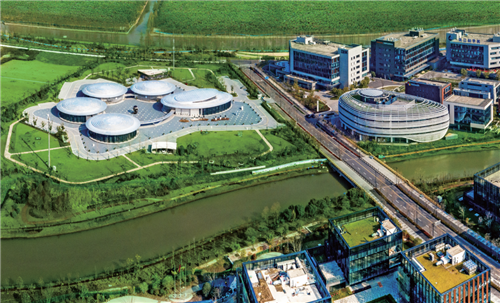 Nearly 20 pharmaceutical companies in Pudong's Zhangjiang were included on the 2021 list of the Most Innovative Chinese Pharmaceutical Enterprises, according to an announcement at the 12th China Healthcare Summit of Entrepreneurs, Scientists and Investors held in Hangzhou, East China's Zhejiang on Dec 23.

The list was based on an enterprise's level of innovativeness, focusing specifically on "foundation", "process" and "results", while also including other paramenters such as the number of granted patents and clinical trials.

The top 100 enterprises serve as the main driving force for the transformation and upgrading of China's pharmaceutical industry.

They are expected to boost the innovative development and international competitiveness of China's pharmaceutical industry.

The Zhangjiang National Innovation Demonstration Zone in Pudong is a key player in China's pharmaceutical industry, and has developed interactively with industrial parks across the city to boost the whole industrial chain over the past decade.

The zone is home to more than 300 national-level research and development (R&D) institutions, with more under development by top domestic universities such as Tsinghua University, Zhejiang University and Shanghai Jiao Tong University.

The annual output of the biomedical industry in Zhangjiang hit 110 billion yuan ($17.26 billion) in 2020, accounting for 78 percent of the industry's total in Shanghai.

The zone led the country in the R&D of biomedicine. According to official data, China's central regulator has approved 99 innovative pieces of medical equipment since 2014, of which 18 came from Zhangjiang. Among the eight antibody drugs which were approved and became available in the market last year, five were developed by companies based in Zhangjiang.

During the 14th Five-Year Plan period (2021-25), Zhangjiang will make strong efforts to support high-level reform and opening-up of Pudong, and plans to release special funds to promote innovation-driven development in the zone. Efforts will also be made to create a sound business environment and promote the development of industrial clusters.