Shanghai plans to lead in hydrogen 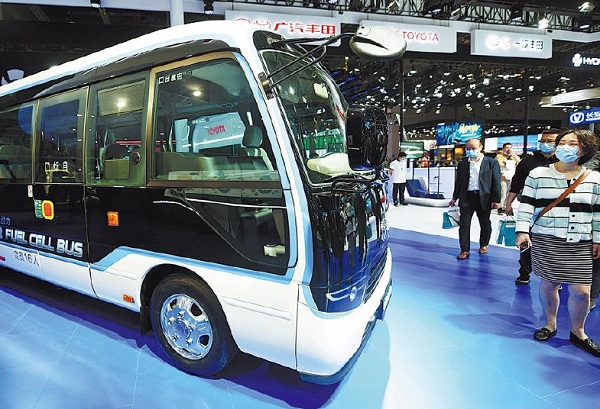 Shanghai is aiming to lead the development of the country's hydrogen industry with more refueling stations and fuel cell electric vehicles in the next three years, said officials and industrial insiders at a summit held in the city last week.

Liu Ping, deputy director of Shanghai Municipal Commission of Economy and Informatization, said that by 2023 the city will build 10,000 hydrogen cars and more than 30 hydrogen stations－with another 70 stations in the pipeline.

"Shanghai will push forward collaborative fuel cell projects to put 5,000 hydrogen cars in use in Suzhou, Nantong, Jiaxing, Zibo, Erdos and the Ningdong Energy Chemical Industry Base by 2025," Liu said at the summit.

"Hydrogen power is a strategic direction for China's energy transition, and developing hydrogen-powered vehicles are an important path to achieve that mission," he added.

The summit was held by the Shanghai Partnership of Fuel Cell Vehicles, Shanghai-Yangtze River Delta Hydrogen Technology Center, and Jiading Hydrogen Energy Hub to mark the two decades of development of new energy vehicles in China.

Yu pointed out that the Ministry of Science and Technology has listed hydrogen energy as a standalone project for the first time in its key research and development program of the country's 14th Five-Year Plan (2021-25).

"China's advantage in developing fuel cell electric vehicles is its big market. Shanghai is among the three major national demonstration city clusters for the use of fuel cell vehicles," he said. "It's important to increase the number of hydrogen cars to achieve economies of scale."

Gan Yong, an academician of the Chinese Academy of Engineering, said Shanghai has an ideal scenario for hydrogen-powered vehicles: heavy-duty trucks at ports.

"In the future, hydrogen produced by offshore wind farms can be piped to ports, making it convenient to use," he said. "It's also more environmentally friendly to replace trucks run on diesel with ones using clean hydrogen."