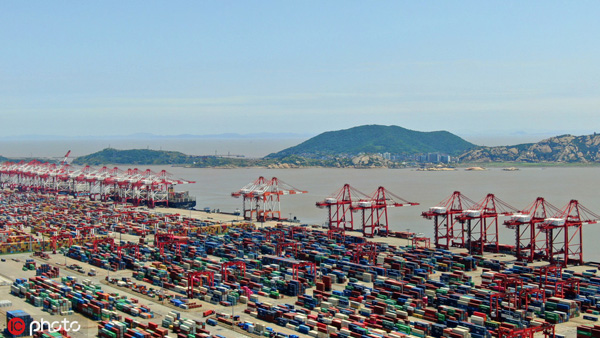 A sweeping view of the Yangshan Deepwater Port in the south of Shanghai. [Photo/IC]

Business is booming at the giant Shanghai Port in East China – according to data recently released by the Office for Port Services of the Shanghai Municipal Commission of Commerce.

It found that as of October, the annual cumulative value of foreign trade of Shanghai Port had reached 8,167 billion yuan ($1,285 billion), up 14.6 percent year-on-year.

It is projected that the total foreign trade volume of Shanghai Port will exceed that of last year and hit a record. In so doing, its share in the global market will further increase from 3.2 percent last year – consolidating Shanghai city's position as the world's biggest trading port metropolis.

During the 13th Five-Year Plan period (2016-20), Shanghai opened a raft of port support facilities – including the fourth phase of Yangshan Port, the second phase of the Wusong Cruise Terminal and a key satellite building for Pudong Airport – reportedly forming a comprehensive layout of open ports for water transport, aviation and the railways.

The optimization of Shanghai Port is widely understood to be inseparable from its digital transformation.

Thanks to the city's development of its "smart port", in 2020 the annual container throughput of Shanghai Port reached 43.5 million TEUs (twenty-foot equivalent units). Its performance in that area has now ranked first in the world for 11 consecutive years.

The platform allows companies to make a reservation for their customs declarations, in order to reduce waiting and inquiry times, helping to speed up the trading process.

According to the Shanghai Municipal Commission of Commerce, which manages the window, by the end of last year there were 109,000 accounts registered on it, which covered all export tax rebates in the trading of goods. Moreover, a total of 103.3 billion yuan of tax rebates were channeled through the platform.