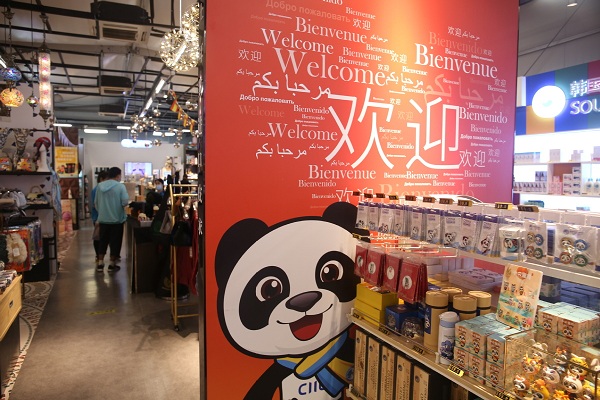 A poster displays the word or words for "welcome" in different languages at the CIIE Fair on the Nanjing Road pedestrian walkway in Shanghai, Nov 10, 2021. [Photo/IC]

Premier Li Keqiang pledged greater strides in opening up the Chinese market to foreign investors and heightened protection of intellectual property rights during an inspection trip to Shanghai on Monday and Tuesday.

Li highlighted the need to foster an enabling environment for various market players and harness the impetus for growth with reform and opening-up to enable the steady operation of the economy.

He visited the China (Shanghai) Pilot Free Trade Zone and urged the FTZ to continue to blaze new paths, gather new experiences and serve as an example for the whole nation.

Li encouraged Chinese companies to cast their eyes on the international market and boost their competitiveness during the nation's opening-up process.

The premier underscored the significance of taking advantage of opportunities for trade and investment liberalization and facilitation from the Regional Comprehensive Economic Partnership and expanding the room for win-win cooperation.

While inspecting a power plant in Waigaoqiao, he urged power companies to make all-out efforts to ensure the public's well-being and meet the power demand from businesses.

Local authorities must raise their support for businesses and ensure the full implementation of the tax deferral policies and the steady supply of coal for power generation, he said, adding that power outages that resulted in the suspension of production lines must be avoided.

The premier reiterated the need to promote cutting-edge technologies that could improve energy efficiency and enable the clean and efficient use of coal to work toward green and low-carbon development.

Li also held exchanges with owners of small and medium-sized enterprises and assured them that China will continue to adopt policies to help them resolve their difficulties.

The government will continue to focus on market players in its policymaking, he said.