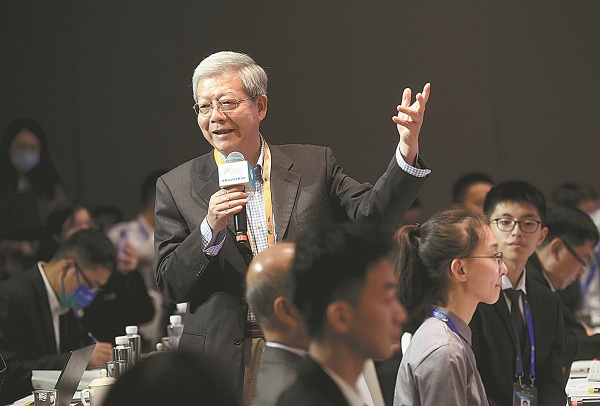 Yang Yuliang, an academician with the Chinese Academy of Sciences, talks to young talent at a sideline event of the Fourth World Laureates Forum in Shanghai on Sunday. XU CHENG/FOR CHINA DAILY

International communication has been critical as pandemic persists

During a forum that opened in Shanghai on Monday, top scientists from around the world issued an initiative to their counterparts worldwide to join hands to find answers as the world confronts major challenges, including public health, climate change and sustainable energy.

The COVID-19 pandemic has shown the power of science to address global problems, they said. With worldwide efforts, prevention and control methods and a solution through vaccine development were accomplished swiftly.

"Open communication of observations and ideas is the source of progress. International communication, through speech and publication, leads to testing and validation, to the elimination of errors and to application," said Michael Levitt, vice-chairman of the World Laureates Association, who announced the initiative entitled "Open Science: Building an Open Innovative Ecosystem" at the opening ceremony of the Fourth World Laureates Forum.

"Open communication of science also builds trust among scientists in different countries and enhances interactions across areas of science. Increasingly, solutions of problems in one area are found through the use of ideas and methods from another," he said.

Levitt said that his research, which eventually won the 2013 Nobel Prize in chemistry, was intertwined with breakthroughs in basic science across many fields. It was a result of both the crossover of biophysics and chemistry and the help of enhanced computing that led to the first computer simulation of protein folding.

The WLA and the China Association for Science and Technology, which are jointly hosting the three-day event, said the forum this year had the largest number of participants since the inaugural gathering was held in 2018.

Roger Kornberg, WLA chairman, said that basic science is open through means including publications and meetings, but there needs to be an improvement in the publication process to accelerate and improve access to information as the body of knowledge grows rapidly.

"For example, for the natural and social sciences journal Annual Reviews, of which I'm on the editing board, we're mulling to provide free subscription for more readers in need," said Kornberg, also a 2006 Nobel Prize laureate in chemistry.

Yang Wei, an academician with the Chinese Academy of Sciences and a foreign member of the National Academy of Engineering of the United States, said that the number of scientific research projects involving collaboration currently account for 23 percent of the total in China, a rise from 5 percent two decades ago.

"Open science is also about allowing more people, especially the young, to receive science education and participate in scientific research. It's of significance that young scientists need to be heard," he said.

Looking toward the future, Shanghai is more than confident in becoming a city of wisdom, creations and aspirations, and contributing to world science and technological innovations, said Vice-Mayor Wu Qing.

"Home to 501 foreign-funded research and development centers, the municipality supports the extensive collaboration and exchanges among the world's scientists with a goal to become a source of scientific and technological innovation and a node in the international innovation network," he said.

Cao Chen contributed to this story.