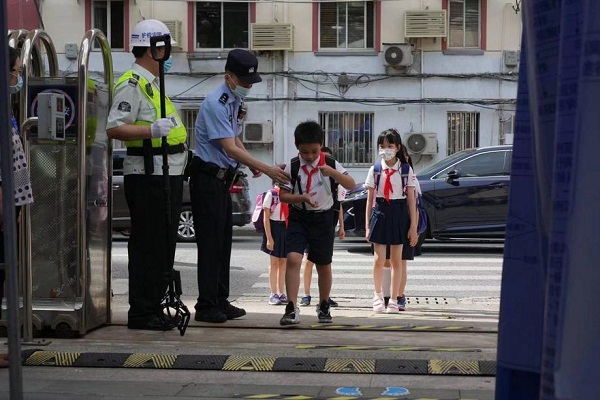 Shanghai's Changning district police and Yuyuan Road No 1 Primary School jointly held a safety drill at the school on Monday to improve their emergency response capability for the new semester, which will begin on Wednesday.

In the first part of the drill, they simulated a scene of a student found to be running a fever when going through temperature check at the gate.

The police officer at the school gate and the school's security workers maintained order for the students waiting to enter the school while teachers took the student with a fever to a designated observation room as arranged.

In the second part of the drill, an individual attempted to intrude into the school with a knife in hand. School security workers stopped the man with their tools immediately and reported to the police. Police arrived at the scene and took the individual under control.

The district police said it had conducted security checks for the security workers and their tools and technologies at all the 135 kindergartens in the regions, as well as primary and middle schools before the new semester.