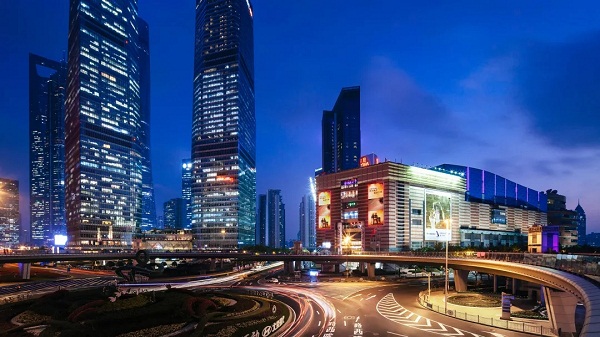 Pudong New Area in East China's Shanghai has seen an increasing number of "first stores" being set up, adding fresh momentum to efforts to build the city into an international consumption center.

The term "first-store economy" refers to a type of real economy measured by the launch of first stores of leading industrial or fashion brands. The definition also includes the launch of traditional brands' flagship or experiential stores operating under a new innovative model.

According to a report recently published by big data consultancy service provider DataQuest China, a total of 513 first stores have settled in Shanghai in the first half of this year, up 60.3 percent year-on-year and 4.4 percent higher compared to 2019. Eighty of the stores are located in Pudong, while 35 are in Lujiazui financial district.

The report noted that among the first stores, there are six making their world or Asian debut, as well as 69 making their Chinese debut. Overseas brands, with those from Japan, the United States, France, South Korea, the United Kingdom, and Italy ranking at the top, make up 15 percent of the newly launched stores.

The commercial projects that are built across Pudong have helped propel the rising first-store economy. For instance, Lalaport shopping park in Jinqiao, which is run by Shanghai Jinqiao Export Processing Zone United Development Co and Japan's Mitsui Fudosan Realty, has brought in five leading brands' first stores in China, including those by Bandai Namco VS Park and Piping Hot.

The number of newly opened first stores in Shanghai in 2021 is expected to surpass 1,000, according to the report. A number of commercial facilities that are currently under construction, such as New Bund Taikoo Li, Bicester Village Shanghai, and Shanghai Florentia Village, will draw more brands to expand their businesses in the city.