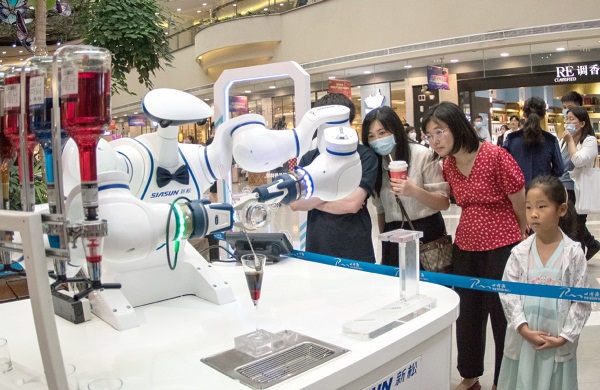 Visitors observe a robot making a cocktail during the WAIC 2021 in Shanghai on July 5. [Photo provided to China Daily]

Continued efforts will be made to build Shanghai's Pudong New Area into a major hub for technology innovation in the near future, a local official said on Wednesday.

Xu Xin, director of the Pudong Science Technology and Economy Commission, said Pudong will mainly focus on boosting the development of key industries, such as integrated circuits, smart manufacturing and new energy vehicles.

Citing the newly-released guideline to build Pudong into a pioneer of socialist modernization, Xu said Pudong is set to lead innovation in core industries and fields, becoming a key driver for sharpening China's key competitive edge in high-tech sectors.

The new guideline, recently released by the Communist Party of China Central Committee and the State Council, is set to give full play to Pudong's leading role in promoting high-level reform and opening-up and building it into an innovation hub with global influence.

The document requires speeding up research and development of key technologies, such as integrated circuits, life sciences and artificial intelligence, and accelerate the construction of Zhangjiang Comprehensive National Science Center and national laboratories.