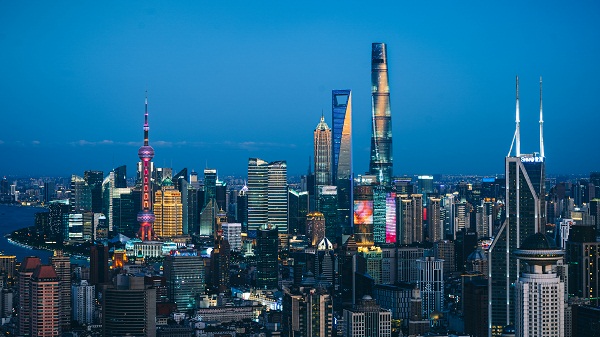 Aerial photo taken on Nov 3, 2019, shows a night view of the Lujiazui area in Shanghai. [Photo/IC]

China is set to give full play to the Pudong New Area's key role in high-level reform and opening-up, aiming to build it into a leading area for socialist modernization, according to a guideline released on Thursday.

Experts said the new document came as Pudong New Area, the reform and opening-up showpiece in Shanghai, has been tasked by the central government with the new mission amid the complicated and grim international situation, marking the country's latest step to further drive reform and opening-up, boost high-quality economic growth and foster the dual-circulation development pattern.

The new guideline, released by the Communist Party of China Central Committee and the State Council, requires building Pudong into a central node in the domestic market, establishing a strategic link between the domestic and international markets and giving greater play to its role in boosting the integrated development of the Yangtze River Delta region.

By 2035, Pudong's modern economic system will be fully established, the modern urban area will be fully completed, and its modernization of system and capacity for governance will be realized. By then, its development level and international competitiveness will be among global leaders.

By 2050, Pudong will become a key area with a global level of attractiveness, creativity, competitiveness and influence.

Wang Zhen, vice-president of the Shanghai Academy of Social Sciences, said the new document will give full play to Pudong's leading role in promoting high-level reform and opening-up and building it into an innovation hub with global influence.

He believed that the development of Pudong will help drive the integrated development of the Yangtze River Delta region and inject strong impetus into the country's high-quality development. "Pudong, which will help better allocate global resources, is set to serve as a key growth engine for China."

The document said that Pudong will speed up research and development of key technologies such as integrated circuits, life sciences and artificial intelligence, and accelerate the construction of Zhangjiang Comprehensive National Science Center and national laboratories.

According to the guideline, further measures will be introduced to build a number of world-class innovative industrial clusters, deepen the reform of scientific and technological innovation systems and focus on institutional opening-up that covers regulations, management and standards, and improve the financial market system.

Specifically, Pudong will consider providing a reduced tax rate for qualified enterprises engaged in production and research in key fields such as integrated circuits, AI, biomedicine and civil aviation. The income tax on those enterprises will be levied at a reduced rate of 15 percent within five years from the date of their establishment.

Wang Xinkui, chairman of the Shanghai WTO Affairs Consultation Center, spoke highly of the new guideline, saying that the future development of Pudong will be a model for other regions in the nation in terms of high-level reform and opening-up.

On June 10, the Standing Committee of the 13th National People's Congress passed a decision authorizing Shanghai's legislature to make laws specific to the Pudong New Area.