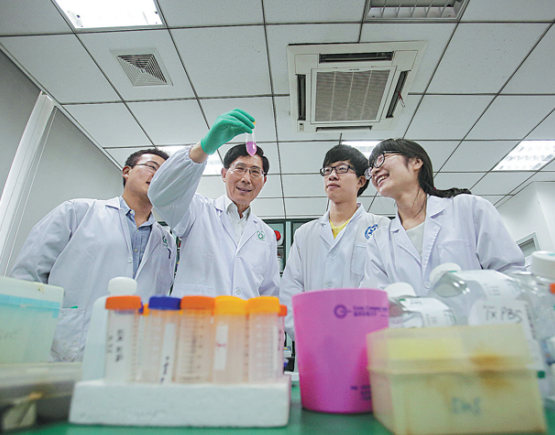 Shanghai's Zhangjiang National Innovation Demonstration Zone has become a pharma valley with international appeal as the number of innovative biomedical enterprises located in the area now exceeds 1,000, according to the Zhangjiang management committee.

A considerable number of new drugs researched and developed at Zhangjiang, a major player in China's pharmaceutical industry, are expected to hit the market in the near future. A batch of biomedical enterprises has already been listed on the Shanghai bourse's sci-tech innovation board, commonly known as the STAR Market.

They include a PD-1 antibody for tumor immunotherapy, a tumor-targeting drug and a PARP inhibitor also used for cancer treatment. A homegrown drug for treating Alzheimer's patients launched in China in November 2019 became the world's first new therapy for treating the disease in 17 years.

Chen Kaixian, an academician with the Chinese Academy of Sciences (CAS) and a core figure in rallying the country's efforts in new drug R&D, said that new drug research projects in the country stretch back to the 1950s, including more impressive ones related to antimalarial drugs of the artemisinin species.

However, the overall innovation capability has until recently been relatively weak.

"But now, China has entered into the world's second echelon in terms of new drug innovation and is advanced in some key indicators. This is also a reflection of the country's revival," said Chen, who is also a researcher with the CAS Shanghai Institute of Materia Medica.

A report by the China Pharmaceutical Industry Research and Development Association and the China Association of Enterprises with Foreign Investment showed that the quantity of medical innovations from China and their global contributions from 2015 to 2020 have entered into the world's second echelon.

"Evaluating the number of innovative products in the pipeline, China had secured first place in the second echelon in R&D of new drugs, and the gap between China and the US－the first echelon－was narrowing," said Chen, whose work experience includes being SIMM director from 1996 to 2004.

A McKinsey report also showed that the proportion of innovative drugs approved in China developed by domestic companies was rising over the past years, a period when multinational pharmaceutical companies even accelerated their pace of introducing drugs into the country.

Chen said that domestic drug R&D facilities are enjoying a richer pipeline these past few years and a stronger talent repository. For example, the drug research specialist team in SIMM has grown from fewer than 200 in its initial phase to more than 2,000 now.

In 2003, SIMM's new site at Zhangjiang was completed and put into use. It became the first national-level core research institution in biomedicine to be relocated to Zhangjiang and produced a strong demonstration effect.

"Subsequently, centers specializing in drug metabolism research and traditional Chinese medicine innovation were established at Zhangjiang in the following years. A national platform system of innovative drug R&D technologies gradually took shape in Pudong," said Chen, who worked as chairman of the Shanghai Association for Science and Technology from 2011 to 2018.

TCM, which is gaining a rising foothold in modernization and internationalization in recent years, also has a stronger presence in Zhangjiang these years as multiple TCM research centers, key labs as well as the Shanghai University of Traditional Chinese Medicine were established or relocated there to be linked to resources at home and abroad.

"The collaboration of Chinese and Western medicine will definitely promote the development of medical science in the future, and we'll for sure witness that Chinese medicine will shine.

The combination of Chinese and Western medicine will also be the path for the prevention and treatment of clinical infectious diseases in the future, just as how it plays its role in fighting against the COVID-19 pandemic," Chen said.