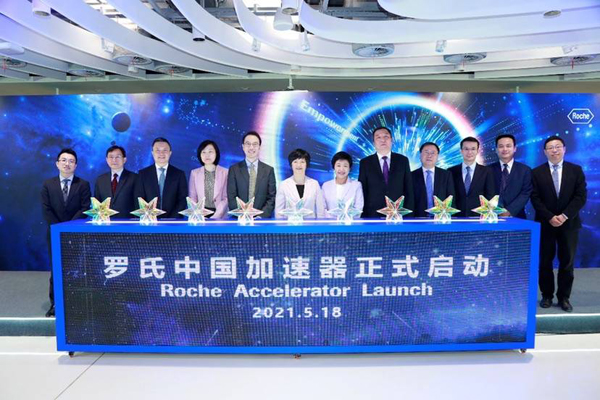 The Roche Accelerator is launched in Shanghai on May 18. [Photo/eastday.com]

Swiss international pharma and health giant Roche on May 18 officially launched a major initiative – called the Roche Accelerator – with the aim of consolidating and expanding its already considerable presence in China.

The project was officially launched at the Roche campus in the Zhangjiang High-tech Park in Shanghai city in East China, local media reported.

The multinational says the Roche Accelerator is an initiative to build an innovation hub and contribute to the local pharma and health innovation ecosystem in China. It aims to attract entrepreneurs in the areas of pharmaceuticals, diagnostics and personalized healthcare, including artificial intelligence and digital solutions.

The 5,000-square-meter building – set to be completed in the first quarter of 2022 – will be home to state-of-the-art laboratories, offices and collaboration spaces for entrepreneurs.

As a key strategic investment project, it is reportedly the company's first in-house accelerator in the world and the company says it demonstrates its long-term commitment to Shanghai and China as a strategic global center.

Roche said its goal is to strengthen investment in research and development and increase innovation in China, enhance collaborations with government and local partners – and build an external innovation hub that contributes to the local innovation ecosystem.

More than 200 million yuan ($31.06 million) will be invested in the Roche Accelerator, which will integrate Roche's resources to secure partnerships. The company said it will provide tailor-made support for startups in pharma, diagnostics and personalized healthcare.