Shanghai to roll out vaccination for those 76 and above 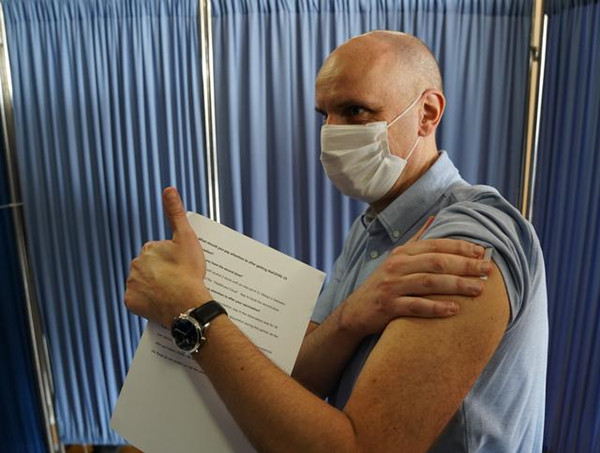 A foreigner gives a thumbs-up after receiving a dose of the COVID-19 vaccine in Shanghai on March 29, 2021. [Photo/Xinhua]

Shanghai will soon include residents aged 76 and above in its voluntary and free COVID-19 vaccination program, the city government announced on Saturday.

Like individuals between 18 and 75, the current population eligible for the vaccination program, people aged 76 or above who are healthy and are not allergic to the vaccines can reserve for inoculation at their neighborhoods starting from Monday and get vaccinated at designated sites.

The Shanghai Health Commission reminded that people of this age bracket should be accompanied by family when getting the vaccines.

Sun Xiaodong, deputy director of the Shanghai Municipal Center for Disease Control and Prevention, said the elderly people, especially those with underlying disease, such as cardiovascular diseases, hypertension, and diabetes, are more susceptible to the virus and stand a higher possibility of developing into severe cases.

"Such individuals ought to get protection through the vaccination. The premise is that his or her underlying diseases are in a stable state rather than in a period of acute attack," he said.

Regarding those who have gone surgical operations, Sun suggested that they reserve for the vaccination after their health situations become stable and obtain a nod from the doctors in charge of their cases.

By the end of 2020, Shanghai’s population aged 60 and above reached 5.34 million, accounting for 36 percent of the permanent residents, up 3 percent from the previous year.