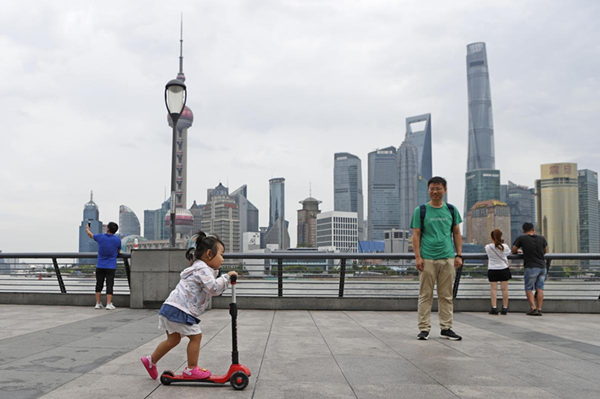 Tourists and locals enjoy at the Bund area of Shanghai. [Photo by Yin Liqin/China News Service]

Shanghai is stepping up efforts to attract business and investment from all over the world to further advance its high-quality economic development, officials said.

The municipal government inked agreements for 216 major industrial projects, involving a combined investment of 489.8 billion yuan ($74.9 billion), on Wednesday during the Shanghai Global Investment Promotion Conference 2021. The agreements were signed in the presence of Shanghai Party secretary Li Qiang.

Manufacturing companies accounted for 118 projects, including 16 integrated circuit projects and 11 artificial intelligence projects. A total of 31 biomedicine projects were signed, including the CanSino Biologics project which can churn out 200 million doses of COVID-19 vaccines every year when put into operation.

Deals for 48 financial projects were also signed. People's Insurance Co (Group) of China Ltd is planning to set up its reinsurance center in central Shanghai's Huangpu district. This will help attract more such investments and help Shanghai grow into a major offshore insurance center, according to government officials.

Video-sharing site Bilibili inked a deal to set up its headquarters in northeastern Shanghai's Yangpu district as part of the 43 regional headquarters project agreements signed on Wednesday. Qiu Wei, director of the software and information services division of the Shanghai Municipal Commission of Economy and Informatization, said an ecosystem combining online entertainment, fashion, culture, tourism and other derivative projects is likely to be incubated with the help of Bilibili. It is expected that the area where Bilibili is setting up its headquarters will grow into a leading demonstration base for the global digital cultural industry, she said.

Xu Ming, deputy director of the industrial investment division of the Shanghai Municipal Commission of Economy and Informatization, said these industry leaders have already played an important role in bringing business to the municipality. Hillhouse, for instance, helped introduce biomedicine projects valued at over 60 billion yuan in the Lingang free trade area last year.

During the 14th Five-Year Plan period (2021-25), Shanghai will make continued efforts to attract as many industries as possible to set up bases in the city. More importantly, Shanghai will provide tailor-made services to companies based on their development stage, said Xu. It is also the municipal government's hope that big international companies will use the global investment partners scheme to showcase Shanghai's excellent resources and business environment to other companies, he said.