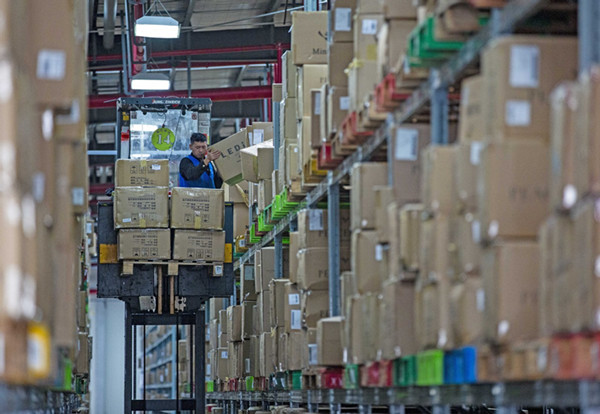 China is expanding cross-border e-commerce pilot zones as part of the efforts to provide new impetus to imports and consumption, experts said.

All cities and regions that host free trade zones, comprehensive areas of cross-border e-commerce, comprehensive bonded-areas, and select bonded-logistics centers are now eligible to start pilot programs of cross-border retail imports, according to a notice published on Monday by a group of government departments including the Ministry of Commerce and the National Development and Reform Commission.

In these pilot areas, enterprises can get preferential tax policies, such as exemption of value-added tax and consumption tax on retail exports and reduction of corporate income tax rates.

Pilot cities that join the program can conduct more convenient modes of imports like "online shopping bonded import mode", whereby imported retail goods can be temporarily stored at the bonded warehouse before being delivered to customers.

Before this, China had approved five batches of 105 cross-border e-commerce pilot zones since the first such zone was set up in Hangzhou, Zhejiang province, in 2015.

While the first two batches of 13 zones were located in larger cities in the eastern coastal areas, the third batch and onward extended to the vast inland and later included the entire Hainan island, where China is planning to build a globally influential free trade zone by 2050.

Experts see the move resonating with China's dual-circulation development pattern and diversifying trade links in the context of the Belt and Road Initiative.

"This is another boon to encourage consumption of quality merchandise, given that the COVID-19 epidemic is preventing overseas travel," said Jason Yu, general manager of consultancy Kantar Worldpanel in China. "It's also an answer to the dual circulation pattern on trade and consumption."

China saw its total imports and exports of goods expand 1.9 percent on a yearly basis to 32.16 trillion yuan ($4.94 trillion) last year, according to the General Administration of Customs. It was the world's only major economy to register positive growth last year with the pandemic hurting global businesses.

Among them, the country's foreign trade via cross-border e-commerce advanced 31.1 percent to 1.69 trillion yuan, with over 10,000 traditional foreign trade firms going online for the first time in 2020, according to Xinhua.

Companies are also forging an ecosystem in cross-border trade that covers product design, e-commerce platforms, logistics, financing and beyond, said Wang Jian, a professor of international trade and economics at the University of International Business and Economics in Beijing.

"Small and medium-sized enterprises contribute to 95 percent of global economic growth, and the private sector can play its part in revisiting and potentially revising the rules of world trade through such practices," he said.