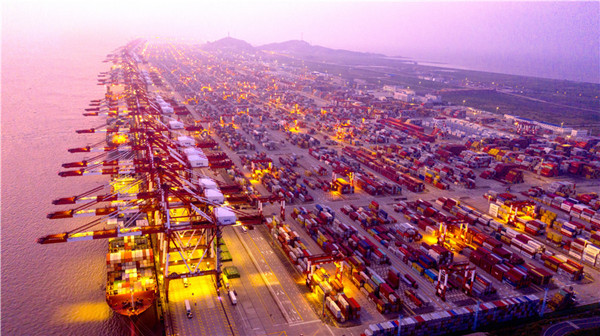 The container throughput of Shanghai Port in East China continued to grow despite headwinds last year, hitting 43.5 million twenty-foot equivalent units (TEUs), and retaining the top spot in the world for the 11th consecutive year, according to statistics released by the city's customs authorities.

Shanghai Port's global ranking in terms of the construction of an international shipping center also climbed to third from seventh in 2014, according to the Xinhua-Baltic International Shipping Center Development Index released in July.

According to officials, this remarkable growth is due to the port's continuous efforts to optimize its business environment.

At the beginning of last year, strict measures were imposed to curb the spread of COVID-19, and the Waigaoqiao Port in Shanghai opened a green channel for medical supplies to improve the efficiency of ship departures, cargo unloading, and document handling.

Additionally, customs authorities introduced an array of measures to promote the resumption of work and production and stabilize supply and industrial chains, all of which have played a key role in helping the city stabilize its foreign trade.

Efforts have also been made to deepen reforms in customs declarations at Shanghai's Yangshan Port. This has significantly reduced the time needed for customs clearance to within four hours and improved the level of trade facilitation. The container throughput of Yangshan Port exceeded 20 million TEUs last year, marking another record high.