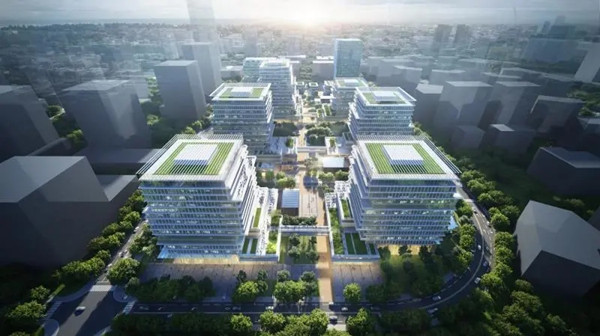 The "Zhangjiang Online" industrial park, with a planned area of 4.1 square kilometers, was launched in Zhangjiang Science City in Pudong, Shanghai on Jan 4.

The park will take full advantage of Zhangjiang's scientific, technological, and talent strength, and focus on cultivating new technologies and products for the online economy in an effort to develop itself into a leader of Shanghai's online new economy, according to Yuan Tao, chairman of Zhangjiang Group.

The park will take advantage of Zhangjiang's software and information service industries to promote the development of strategic emerging industries such as artificial intelligence (AI), 5G, internet, big data, and blockchain.

A new industrial ecosystem will also be developed in the park to promote online entertainment, including digital music, holographic imaging, digital media, and future education.

In addition, the new park will take full advantage of Zhangjiang's strength in the life and health industries to promote the integrated development of digitization and medical treatment and progress the research and development of new drugs by using AI, online diagnostics, medical big data, and intelligent supply chains.

Efforts will also be made to boost the digital economy by adopting advanced technologies such as 5G, according to a local official.

According to the development plan, the "Zhangjiang Online" industrial park will drive the high-quality development of Zhangjiang's online new economy, leading to a total industry scale of over 100 billion yuan ($15.49 billion) in the future. The park is expected to attract at least 1,000 leading enterprises and serve as a hub for talent in the online new economy.