Jinqiao in 30 years: An industrial transformation and upgrading model for China's development zones 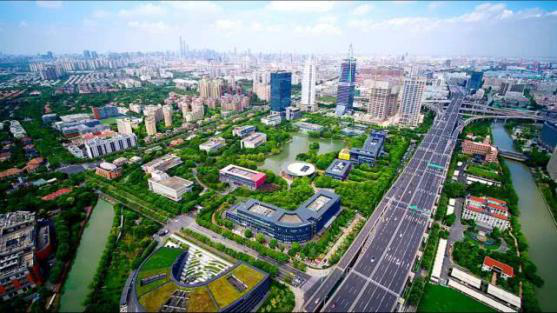 The Jinqiao Economic and Technological Development Zone in Pudong New Area, Shanghai, was approved for establishment by the State Council in 1990, and after 30 years of development, it has become a pioneering example for the country's manufacturing industrial parks.

In April 1990, the State Council approved the establishment of Pudong New Area, and in September that same year, the Jinqiao Economic and Technological Development Zone, covering a planned area of 20.48 square kilometers, was established. It was the country's first national development zone focusing on export processing. In 2014, the zone became a part of the China (Shanghai) Pilot Free Trade Zone (FTZ).

Jinqiao is the country's only pilot free trade zone that focuses on a dual-core strategy and features advanced manufacturing and production services. It is also a key part of Shanghai's mission to build a scientific and technological innovation center with global influence.

The zone is now a hub for both traditional and modern industries, including automobile manufacturing, electronic information, home appliances, biological medicine, big data, and artificial intelligence.

According to statistics, the Jinqiao Economic and Technological Development Zone, which only covers 2 percent of the land area in Pudong, contributes 25 percent of the area's industrial economy. It has generated 3.46 trillion yuan ($512.77) in total industrial output over the past 30 years, and its business income has totaled 7.48 trillion yuan since its establishment in 1990.

With its solid foundation in the communications industry, Jinqiao is working to strengthen efforts to develop the 5G industry and build a 5G industrial park in an effort to become a hub for intelligent manufacturing.