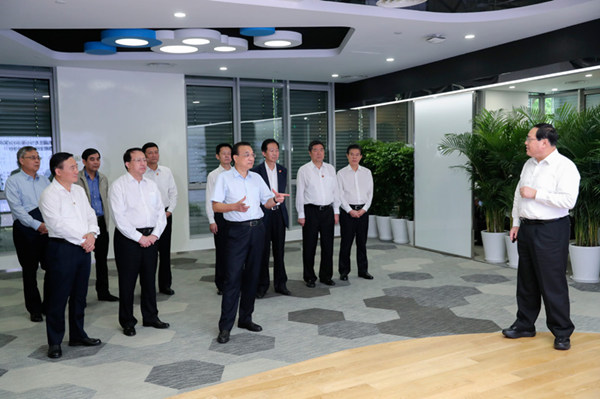 Premier Li Keqiang heard reports on the development and opening-up of Pudong New Area, construction of the pilot free trade zone and online integration of government services when he visited Pudong in East China's Shanghai on Sept 21.

According to officials, the Shanghai pilot free trade zone explores new paths and accumulates experience for the whole country to further reform and opening-up.

As the FTZ has been working on an upgraded version of the reform plan, there is hope the Chinese government will provide greater support with regard to laws, regulations and policies.

Premier Li said Shanghai is a leading city of the Yangtze River Economic Belt, and has been a front-runner nationwide in economic and social development.

The changes in Pudong have astonished the world over the past 30 years, he added.

The Shanghai free trade zone, the first in the nation, has made steady progress every year and become a national benchmark, and the new Lingang Special Area in the FTZ has been a “golden phoenix” taking off, the Premier said.

The Premier said China will give full support at the national level for greater reform and opening-up at the Shanghai FTZ, and urged relevant departments to follow suit.

The Shanghai-pioneered integrated online government services have become a major content of the administrative reform and a successful demonstration of Shanghai, the Premier said, adding he hopes Shanghai will move forward to provide more experience for the whole nation at a new starting point.

He also visited the China research center of SAP, and talked with software engineers there.

SAP, headquartered in Germany, is the biggest business management and synergetic e-commerce solution provider, dedicated to assisting enterprises with internet platforms and digitalization.

The Premier asked whether there is any gap between robots designed in China and Germany, and got the answer that components of the China-made ones call for further precision.

Opening-up unveils gaps, and only acknowledgment of the gaps can usher in improvements, the Premier said.

China's manufacturing upgrading calls for unswerving expansion of opening-up and cooperation, only in this way can win-win partnership triumphs, he added.

Premier praised 51job, a provider of human resources services, for promoting employment when he inspected the company in Shanghai.

He learned about the salary changes in different industries this year, especially the employment of graduates and their expectations during the inspection.

“There are 8.74 million college graduates in China this year, and I'd like to learn firsthand about their employment situation from you,” the Premier said.

“Employment is of paramount importance to people's lives, the foundation of economic development and the source of wealth, so to stabilize the economic fundamentals this year, we must give priority to employment,” he reiterated.

He praised 51job for providing recruitment information to job seekers, saying the business not only helps boost the country's economy but also eases worries of job seekers and their families.