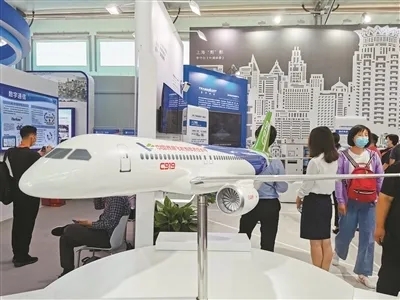 A model of China's domestically-made C919 passenger plane is on display at the ongoing 2020 China International Fair for Trade in Services. [Photo/Official WeChat account: gh_01c6f7b4cf3d]

Pudong New Area in Shanghai held a promotional conference at the ongoing 2020 China International Fair for Trade in Services (CIFTIS) on Sept 5, aiming to promote the development of services trade in Pudong and explore new cooperation opportunities, according to a local media report on Sept 7.

Shanghai has been focusing more on the development of services trade in Pudong New Area in recent years. Statistics show that Pudong's import and export service trade was valued at $87.16 billion in 2019, accounting for 47.3 percent of Shanghai's total.

According to statistics, transportation, tourism, and professional management consulting are the three main growth engines behind Pudong's import and export service trade, accounting for about 75 percent of the total value. Communication, architecture, and insurance services also saw sharp growth in imports and exports.

Shanghai has been leading the country in the import and export service trade in recent years, and Pudong, a leader in China's reform and opening-up, has implemented a number of creative measures to promote the development of its services trade.

The China (Shanghai) Pilot Free Trade Zone (FTZ) in Pudong has launched an array of reform measures for services involving investment, trade, and finance since its establishment in 2013. More than 300 institutional innovations made in the Shanghai FTZ have been implemented in various pilot free trade zones across the country, which will provide a boost to the Yangtze River Delta region and the Belt and Road Initiative.

In the future, Pudong plans to deepen reforms in its institutional innovation system to improve its service quality, enhance its role in global resource allocation, and create a better business environment for global investors.