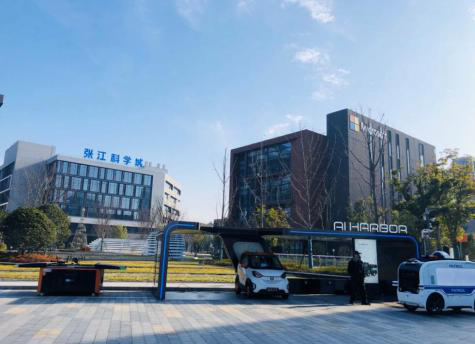 Statistics show that the tax revenue of Zhangjiang Science City was 18.4 billion yuan ($2.69 billion) in the January to June period, and the amount of paid-in foreign capital grew by 20.32 percent year-on-year to nearly $1.4 billion, accounting for 29.52 percent of the FTZ's total capital.

The city saw 634 newly-established domestic enterprises in the first half of this year, and gross industrial output value above designated size in the city totaled 138.86 billion yuan, up 24 percent year-on-year, according to statistics.

Zhangjiang is now working to improve its scientific capabilities, promote its leading industries and expand its urban functions, according to Fu Jun, deputy director of the administrative office of Zhangjiang Science City.

The city is currently home to several key national-level projects, including the Shanghai Synchrotron Radiation Facility (SSRF),  National Center for Protein Science, and Shanghai Supercomputer Center. It has also gathered more than 10 world-class universities and research institutions, such as Fudan University, Shanghai Jiaotong University and the Tsung-Dao Lee Institute.

Statistics show that more than 24,000 enterprises have registered in the city, and its leading industries are integrated circuits (IC), biological medicine and artificial intelligence (AI). Sales in the IC industry reached nearly 50 billion yuan from January to June, growing by 36.7 percent year-on-year, while the industrial scale of biological medicine totaled 27.7 billion yuan in the same period.

The AI industry in Zhangjiang has gained strong momentum over the past year. Zhangjiang AIsland, which opened to the public in January 2019, has attracted many large enterprises specializing in AI, big data, cloud computing, blockchain and other cutting-edge technologies.

US tech giants IBM and Microsoft, as well as Alibaba's unit for developing cloud and edge computing chips, have also set up operations on the AIsland.

This year, Zhangjiang is aiming to build an AI empowerment center so as to provide a platform for companies to exchange information, share resources and reach potential partnerships for integrated development.

Fu said that Zhangjiang is shifting its focus to expanding the science city into a complete urban area, with infrastructure such as shopping malls, schools and hospitals already having been built.