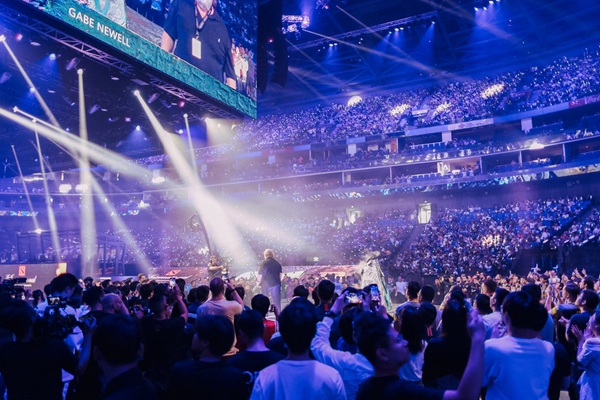 Teams from across the world compete in the 2019 International Dota 2 Championships at Shanghai's Mercedes-Benz Arena on Aug 20. [Photo provided to chinadaily.com.cn]

Pudong is working to build itself into a core area for the innovative development of the e-sports industry in Shanghai, which hopes to become a global e-sports hub.

On July 24, deals were signed for 30 e-sports projects to be undertaken in Pudong, especially the Shanghai FTZ, where many pioneering policies are tested. This will help with the formation of a complete industrial chain there.

What makes Pudong suitable for the development of the e-sports industry is its venues. It is home to the country's top venues, including the Mercedes-Benz Arena and the Yuanshen Sports Center Stadium. It also launched a number of new large venues for professional gaming, including the Senlan E-sports Arena and E.S.A. Space, during the signing ceremony.

The E-One E-sports Industrial Park, one of the major projects, will be home to a number of e-sports-related enterprises engaged in e-sports education and training, game development and production, and event operation and promotion. It will also address the shortage of medium-sized e-sports venues in Pudong.

"After the completion of several 1,000-square-meter venues, Pudong will not only be able to host world-class e-sports competitions, but will also become a permanent host site for regular events. Pudong's goal is to become the top destination for world-class competitions and important domestic leagues," said Huang Wei, director of the culture, sports and tourism bureau of Pudong.

According to Huang, top e-sports events such as the 2020 Peacekeeper Elite Championship and LaLiga E-Sports have announced that they will be held in Pudong, and a number of high-end international events will be held there later this year.

The signing ceremony also witnessed the introduction of live broadcast agencies, industry associations, high-end forums, Gamefy (the country's only TV channel for gaming), and e-sports teams such as NetEase Dragon and other world-class teams.

Huang said that Pudong has become Shanghai's "heart" of e-sports, accounting for one-third of the city's e-sports industry.

More than 70 percent of top global and domestic e-sports finals are held in Pudong, and a number of leading companies, including Tencent Games, NetEase, and Perfect World, have set up branches there.

Pudong is also developing gaming industrial parks in Kangqiao and Waigaoqiao, which are expected to help develop the gaming industry.

The China Game Industry Research Institute was recently established in the Shanghai Pudong Zhangjiang National Digital Publishing Base. This will put Pudong at the forefront of the industry, allowing it to engage in cutting edge research and set standards for e-sports.

Pudong plans to continue focusing on key events and key enterprises to promote the development of leading enterprises in Pudong and drive the formation of an industrial chain. It will take advantage of the policies of the Shanghai FTZ to improve the overall development of the e-sports industry and continue innovating.

Pudong will also create a suitable business environment for the development of the e-sports industry and cooperate with relevant municipal departments to consolidate the pilot registration and management of e-sports athletes. A "green channel" will be opened for the review and approval of game content, which will help attract e-sports talent, cultivate e-sports enterprises, and consolidate industrial strength.