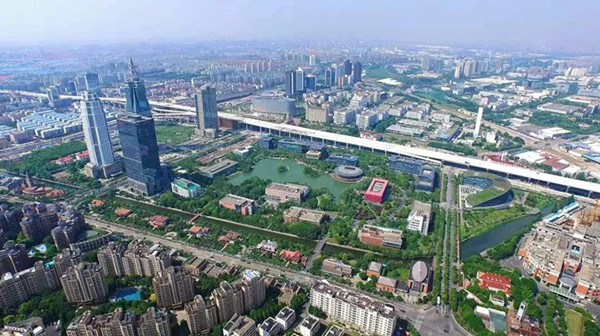 Yang Ye, director of the Jinqiao administration bureau of the Shanghai pilot free trade zone, said that this is the first open road for ICV testing in the downtown area of a megacity in China. Shanghai has opened several test roads in Jiading, Lingang and Fengxian in the suburbs.

Jinqiao is now a gathering place for many leading enterprises at home and abroad, including Chinese technology firm Huawei and SAIC-GM, and over years of development, Jinqiao has grown into a high land of the automotive industry.

As one of the most important industrial clusters for the automotive industry in Shanghai, Jinqiao boasts a complete automobile industry chain, and strong research and development (R&D) capacities in automotive technology. It has fostered a number of high-end industrial clusters related to chips, communications, software and big data, whole automobile manufacturing, and R&D and manufacturing of key components.

Currently, Jinqiao is beefing up efforts to build Shanghai's first 5G industrial park with full 5G signal coverage. It will be developed into one of the 26 characteristic parks in the city, with the aim of speeding up 5G commercialization, including developing self-driving vehicles.

Yang added that in the future, Jinqiao will promote the opening of all roads for self-driving vehicles, in an effort to facilitate the industrial concentration of ICV.