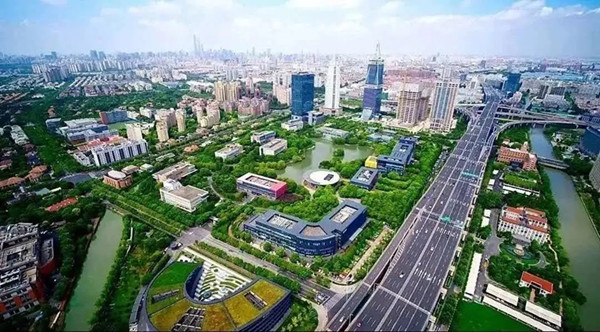 The Jinqiao Economic and Technological Development Zone in the Shanghai Free Trade Zone is a hub for traditional and modern industries. [Photo/Official WeChat account: jinqiaofabu]

The Jinqiao Economic and Technological Development Zone in the Shanghai Free Trade Zone (FTZ) has developed rapidly since its establishment in 1990 , and today it is regarded as a national model for industrial transformation and upgrading, according to a local news report on June 3.

5G-powered video technology developed by Migu, a digital content subsidiary of China Mobile, located in the zone, has impressed people by offering live streams showing a 360-degree view of Mount Qomolangma when a Chinese surveying team re-measured the mountain this year.

Migu filmed the live streams at altitudes of 5,200 meters, 5,800 m, and 6,500 m, respectively, and they attracted more than 410 million viewers, according to Zhuang Wenyun, vice-general manager of Migu.

Jinqiao Cadillac plant is one of the most automated plants in the country and has the highest degree of quality control, reflecting its leading status in the automobile manufacturing industry, according to Zhou Peng, executive director of SAIC-GM's product strategy department.

"Jinqiao is now a cluster of a number of leading enterprises involved in automobile manufacturing, telecommunications, and advanced manufacturing, and the integrative development of these industries gives Jinqiao a unique advantage," said Yan Junjie, deputy director of the Shanghai FTZ's Jinqiao Administration.

Japanese electronic equipment manufacturer Omron has been operating in Jinqiao for more than 20 years, and it has developed into the world's largest R&D (research and development) and production center, with its total number of patents surpassing 150.

Yan added that the zone is now strengthening efforts to build a 5G industrial park and aims to become a hub for intelligent manufacturing.

A number of renowned 5G companies have a presence in the zone, including the Shanghai Research Institute of Huawei. They focus on the development of emerging industries and will provide the manufacturing industry with cutting-edge technology.