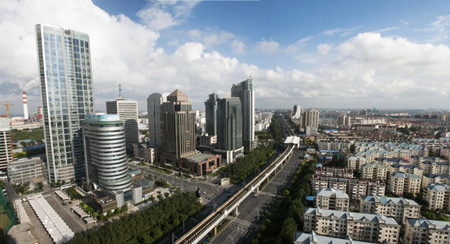 The Waigaoqiao bonded area of the China (Shanghai) Pilot Free Trade Zone, established in 1990, is the first of its kind in the country. [Photo/china-shftz.gov.cn]

Over 30 years of development, the Waigaoqiao bonded area of the China (Shanghai) Pilot Free Trade Zone (FTZ), the first of its kind in the country, has grown into a growth engine to boost the country's international trade.

The area was approved by the State Council in 1990, and is now a special customs supervision area with the largest economy and the richest business functions in China.

Waigaoqiao bonded area is now home to more than 10,000 foreign-invested enterprises, and has developed into a hot spot for foreign investors with nearly 100 multinational firms setting up regional headquarters in the area.

Waigaoqiao bonded area has established trade contacts with 223 countries and regions in the world, and the cumulative value of import and export trade in the area has reached 1.6 trillion yuan ($226.9 billion) in the past 30 years, according to Chen Yanfeng, deputy head of the management committee of Shanghai FTZ's bonded area.

Liu Hong, president of the Shanghai Waigaoqiao Free Trade Zone Group, said that the area will play a leading role in promoting the economic development of the Yangtze River Delta region and the whole country, and will be a pioneer in the country's continued reform and opening-up.

The Shanghai FTZ has launched an offshore intermediary trade services center in Waigaoqiao bonded area, which will help Shanghai transform into an operation center for global trade, and will also push for the construction of the Shanghai  international trade center.

Chen added that offshore financial services are expected to be a new growth driver for the Shanghai FTZ, and offshore intermediary trade will facilitate commerce by lowering logistical expenses for companies.