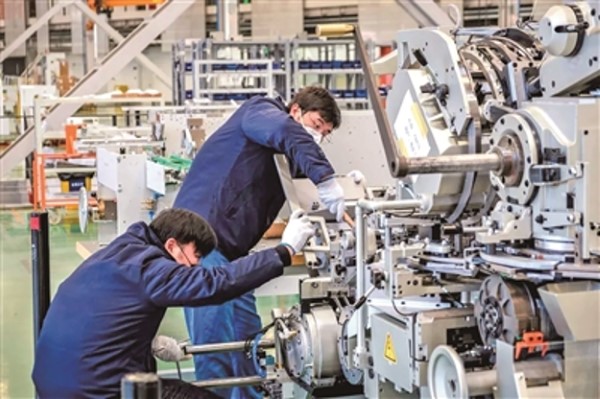 The Jinqiao Development Zone of the China (Shanghai) Pilot Free Trade Zone has made coordinated efforts to prevent and control the virus and boost economic and social growth.

It is estimated that nearly 1,000 companies in the zone will benefit from the rent exemption policy. A total of 141 million yuan ($20 million) in rent will   be saved for companies.

"The upper-level authorities implemented a series of polices encouraging state-owned companies to support the development of small and medium-sized companies   during the epidemic," said Tang Wenkan, general manager of Golden Bridge Holding Co Ltd, a subsidiary of Golden Bridge Group.

"As state-owned companies, we must do what we can to support small and medium-sized companies," Tang added.

Wang Kaifeng, general manager of Schaffner EMC Ltd (Shanghai), expressed thanks to Golden Bridge Group, saying that the local government alleviated their  financial burden and create a good environment for them to operate in.

Zeng Zhanghe, general manager of SeeYa (Shanghai) Technology Ltd, also praised the move, saying the rent exemption is "timely rain" for his company, which has been impacted by the outbreak.

According to the officials of the management committee of the Jinqiao Development Zone, they are doing so to relieve the worries of the large number of small and medium-sized companies in the zone.