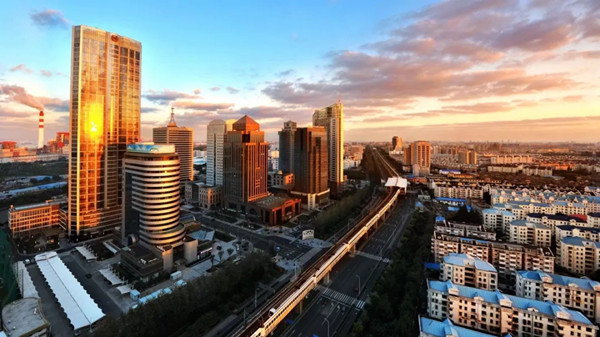 The Waigaoqiao Bonded Area of the China (Shanghai) Pilot Free Trade Zone has become a global hotspot for investment and entrepreneurship, as well as a hub for emerging economies.

In January, the Waigaoqiao Bonded Area received $150 million in additional investment from Shanghai Hode Technology Co Ltd, an arm of the popular Chinese video-sharing website Bilibili, bringing 2020 off to a great start for the area.

According to statistics released by the management committee of the China Shanghai Pilot Free Trade Zone, as of Nov 2019, the Waigaoqiao Bonded Area had reached 1.7 trillion yuan ($243 billion) in gross operating revenue, a year-on-year increase of 4.5 percent.

Total commodity sales in Waigaoqiao surpassed 1.59 trillion yuan, a 4 percent year-on-year increase, while imports and exports in the area were valued at more than 810 billion yuan, an increase of 5.9 percent year on year.

Embracing openness has become a trademark of Waigaoqiao. On Jan 1, 2019, another branch of the Direct Imported Goods (DIG) center opened, meaning customers can now buy imported goods at a cheaper price.

Last June, an upgraded DIG was introduced, providing a brand new platform for retail sales. Commodities being sold elsewhere can also be sold at the upgraded DIG.

Last year also saw the signing of a cooperation project deal between the Waigaoqiao-based China exhibition hall of Air Alpes in Italy and a general aviation camp based in the Lin-gang Special Area.

Officials said that it is openness that makes global trade possible.

The Waigaoqiao Bonded Area is currently home to the headquarters of 98 cross-border companies, and cultural trade is becoming increasingly important in the area.

Last year, the bonded area was honored with the Large Tenant Award – Asia-Pacific, as well as three other awards for Trade Facilitation, Expansion, and Efforts to Improve Transparency, after being evaluated by FDI, a magazine affiliated with the Financial Times. More than 1,200 free trade zones across the globe were evaluated by the magazine.

A host of well-known global investors, including Siemens, Mitsubishi Corporation, and Arrow Electronics, operate in the Waigaoqiao Bonded Area.