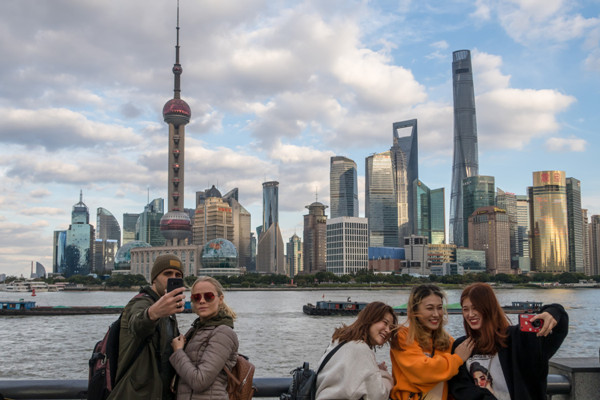 Shanghai will leverage on overall stability and sustained economic momentum to be the role model of China's ongoing reform and opening-up this year along with concerted efforts to reaffirm its position as a bellwether of the Chinese economy to the rest of the world, top officials of the city said on Wednesday.

According to the report on the work of the government released by the municipal authorities on Wednesday, Shanghai's GDP growth was estimated to be over 6 percent for last year. The city expects its GDP to grow by 6 percent this year.

"Over the past year, confronted with the complicated situation of rising risks and challenges at home and abroad, we have remained firm in our strategic focus and development confidence," said Ying Yong, mayor of Shanghai, while delivering the report during the Third Session of the 15th Shanghai Municipal People's Congress, the city's legislative body.

"Rising to the challenges head-on, we have put stabilizing growth high on our agenda, achieving high-quality development through steady growth and effectively addressing external uncertainties with certainties of our own development."

Last year, Shanghai implemented three decisions for the development of the city that President Xi Jinping elaborated on in November 2018. These include the establishment of the Lingang Special Area as an expansion of the China (Shanghai) Pilot Free Trade Zone, the launch of a science and technology innovation board at the Shanghai Stock Exchange and piloting a registration system for listed companies, as well as the integrated development of the Yangtze River Delta region. The city also successfully hosted the China International Import Expo for the second time.

The city is now set to further develop these important policies to strengthen the city's role in global resource allocation, scientific and technological innovation breakthroughs and leading growth in surrounding regions, Ying said.

The construction of the Lingang Special Area will help champion innovation and the opening-up of the whole FTZ of the city, said the mayor.

"We will strive to realize the freedom of investment, trade, capital, transportation and employment and the quick information connections within Lingang, and use an internationally competitive taxation system and complete risk management system," Ying said.

"Such moves will help deepen system innovation and development upgrade in other areas of the Shanghai FTZ, contributing to new breakthroughs in high-level reform and opening-up of the Pudong new area, which is celebrating the 30th anniversary of its development and opening-up this year," he said.

Launched in August, the Lingang Special Area, designed as a pilot zone for new industries and business and trading models with an initial area of nearly 120 square kilometers, has seen registration of more than 4,000 enterprises with total investment of nearly 82 billion yuan ($12 billion) and signing of 168 key business projects, according to the municipal government.

The city also became home to another 50 regional headquarters of multinational companies and 20 foreign-funded research and development centers last year.

Ying said Shanghai will continue to leverage the CIIE platform to promote trade, investment, cultural and people exchanges, to enhance global economic governance and international cooperation, as well as to attract more multinational corporations to set their regional headquarters in the city.

Shanghai also plans to complete the construction of "four international centers"－those for economy, finance, trade and shipping, which were put forward in the mid-2000s, Ying said.

The city is looking to accomplish the building of a basic framework for a scientific and technological innovation center with global influence by the end of this year, Ying said.