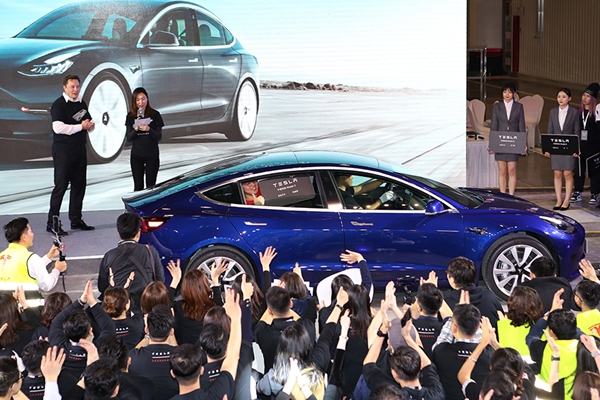 US electric carmaker Tesla Inc said on Tuesday that Model Y would be the second model it would make in China after the Model 3 sedan, a move that analysts say would help it gain a bigger share in the world's largest car market.

CEO Elon Musk announced the start of the project to produce the electric SUV at the Shanghai plant, which broke ground exactly a year ago. He said the plant would also produce future models and Tesla will build a China design center that will design original models for the world, but did not give any specific timeline.

Tesla China's website shows that the Model Y could be produced as early as 2021. Globally the electric SUV is expected to go into production first in Fremont, the United States, later this year.

Musk made the announcement after delivering 10 China-made Model 3 sedans to outside customers at its Shanghai plant. Fifteen Tesla employees had received their vehicles in late December.

The Shanghai plant started trial production in late October and is now producing 3,000 vehicles a week, said the carmaker. Tesla started selling cars in China in 2014.

Last week Tesla cut the starting price for its China-made Model 3 sedans by 16 percent to 299,050 yuan ($42,919) after making it into the list of electric carmakers eligible for government subsidies. Prices of other models available in the Chinese market have been cut as well.

Cui Dongshu, secretary-general of the China Passenger Car Association, said he expects Tesla to slash the prices of China-made vehicles to around 250,000 yuan by the second half of 2020 as the carmaker ramps up the Shanghai plant's production capacity and localizes its supply chain.

The carmaker said it wants to completely localize its China supply chain by the end of this year, which stands at around 30 percent now.

Tesla said it started to assemble battery packs starting from December as well, which are the most expensive parts of electric vehicles.

By reducing prices, Tesla is looking to gain a competitive edge over Chinese startups like Nio and Xpeng.

Xpeng's P7 sedan, which is a rival of Model 3, is expected to hit the market later this year with a presale price starting from 240,000 yuan.

Nio unveiled its EC6 in late December but it decided to announce the prices later. The EC6 will take the Model Y head-on.

"We would like to have some room for adjustments as some other outstanding models are around the corner, such as the Model Y," said Li Bin, Nio founder and chairman.

"Tesla has all the features of premium brands, and its products including battery performance have been proven. After all, it has been there for more than a decade," said Zhang. 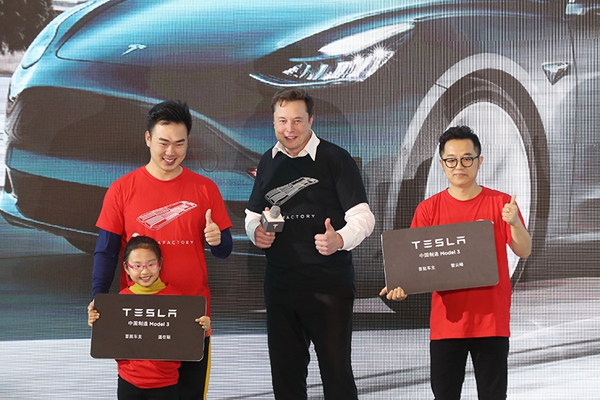 "Statistics show that of the visitors who tried models from both companies, the chances of their choosing us is 50-50. But sometimes they don't come in," said Qin.

"It will be a reasonable choice if you don't have a license plate for gasoline cars in big cities like Beijing or Shanghai. It will not take long before Audi, Mercedes and BMW recognize the new competitor," said Zhang.

Wang Hao, general manager of Tesla China, said in a Weibo post on Jan 3 that: "The Chinese market is vast enough (for all electric carmakers) and our rivals are gasoline carmakers."

Zhang at Automotive Foresight said Tesla's increased China presence will have little impact on established carmakers that are also exploring the electric car market because they have better abilities than startups in manufacturing and cost control.

Xu Heyi, chairman of Mercedes and Hyundai's Chinese partner BAIC Group, said: "Tesla's Model 3 is a benchmark and it will spur us to pursue healthier development. You ask if we are afraid of it? No, we are not. We have our advantages."

The group's new energy arm, BJEV, is one of the largest electric carmakers in the country, and its EU-series vehicles were second only to Model 3 in volume globally in the first 10 months of last year, but were much cheaper.

BJEV is making every effort to move upward and has started trial production of models under its Arcfox brand in a plant built with Canadian automotive supplier Magna.