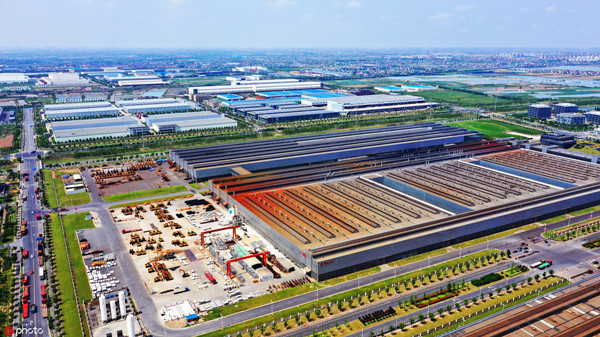 An aerial view of factory buildings in the Lingang area is seen in Shanghai on June 8, 2019. [Photo/IC]

When Stephen Toope, the vice-chancellor of the University of Cambridge, toured around the Jiangbei New Area in Nanjing, East China's Jiangsu province, "great" was his most frequently used word.

In September, Toope led his team to attend a groundbreaking ceremony for the Cambridge University-Nanjing Center of Technology and Innovation in the new area, which belongs to the Nanjing section of the newly inaugurated Jiangsu pilot free trade zone (FTZ).

He was among the first batch of foreign guests to the zone after the State Council announced six new pilot FTZs in August, a move to further promote liberalization and facilitation of foreign trade.

Toope believes the overall planning, talent support and convenience of the FTZ will help the center further promote innovation and development.

"The innovations emerging from this center will enable the development of smart cities in which sensors can enable sustainable lifestyles, improve healthcare, limit pollution and make efficient use of energy," Toope said. "We will become the best partners."

Covering an area of nearly 40 square kilometers, the Nanjing section of the Jiangsu pilot FTZ carries out institutional reforms to seek greater opening up. More than 20 preferential policies have been implemented in the past two months, helping the FTZ attract more than 1,000 new enterprises.

Thanks to these policies, a Canadian company Jiangsu Deying Training Service Co was successfully set up in Nanjing within only three weeks.

"As more Chinese citizens travel overseas, we have found the market for travel safety training is immense. Previously, foreign-owned enterprises were unable to conduct such training in Jiangsu, but the new policies of the FTZ offer us the opportunity," said Shen Yangu with the company.

"With institutional advantages and better business environments, the FTZs are at the forefront in attracting foreign investment," Wang said.

The new pilot FTZs, located in the provinces of Shandong, Jiangsu, Guangxi, Hebei, Yunnan and Heilongjiang, are further opening up the economy. The pilot FTZ of Shandong, for instance, took measures to nurture new businesses, develop the marine economy and explore China-Japan-Republic of Korea economic cooperation.

Starting on Dec 1, China will carry out trial programs separating operation permits from business licenses in all pilot FTZs in a move to further expand market access. The procedures for approval of 442 items are expected to be streamlined.

"China is accelerating its opening up, which is a big cake that has great appeal for foreign firms," said Han Jian, a professor from the Business School of Nanjing University.