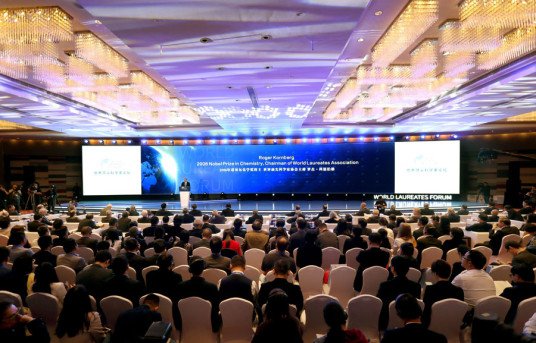 The first World Laureates Forum is held in Lingang, Shanghai, on Oct 29, 2018. [Photo/Xinhua]

On Monday in Stockholm, the 2019 Nobel Prize in Physiology or Medicine was awarded to the two laureates, as well as Peter J. Ratcliffe from Oxford University, for their discovery of how cells sense and adapt to oxygen availability.

Before receiving the honor, Kaelin, the Sidney Farber Professor of Medicine at Harvard Medical School and investigator at the Howard Hughes Medical Institute, along with Semenza, a professor at the Johns Hopkins University School of Medicine, had already confirmed that they would be attending the World Laureates Forum in Shanghai.

The forum is a platform for scientific cooperation that aims to address important issues, such as human health and environmental problems. It was launched last year by the Hong Kong-based World Laureates Association and jointly held by the Lingang administration committee of the Shanghai Free Trade Zone, the Shanghai Association for Science and Technology, the State-owned Lingang Group, and the association's China center.

About 45 Nobel Prize laureates and 22 other notable scientists will participate in the forum.