Pudong speeds up moves to be intl trade center 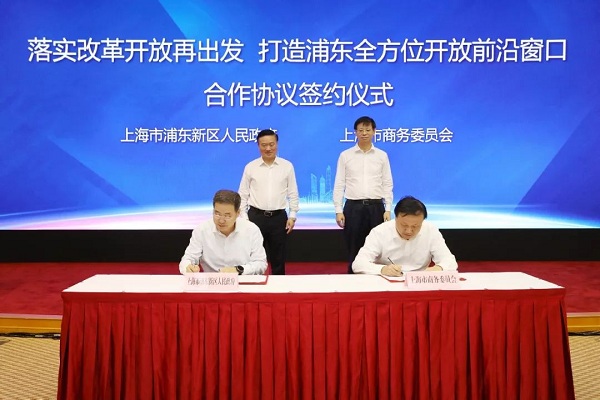 The Shanghai Municipal Commission of Commerce signs a cooperation agreement with Pudong New Area on Sept 11. The accord aims to support Pudong's efforts in further opening up and its development as an international trade center. [Photo/eastday.com]

Pudong New Area of Shanghai is accelerating its efforts to become an international trade center, in the wake of 21 overseas-funded companies signing agreements to set up operations there on Sept 11.

Farfetch, a British fashion online retailer, is one of the companies to forge a partnership with the Bonded Area of China (Shanghai) Pilot Free Trade Zone.

"We are not just simply localizing our foreign websites, but rather have the management and operation team in China," said Qian Jin, operations director of Farfetch Asia Pacific.

She added that the company was optimistic about the development in Pudong due to local government's favorable services and regulatory model for luxury products. Qian also said Farfetch would set up a distribution center in Pudong in the near future.

Over the years, Pudong has made great strides in foreign trade. It now houses more than 10,000 import and export enterprises.

Major breakthroughs have also been made in trade services sector. Last year, Pudong recorded $64.6 billion worth of import and export services trade, a year-on-year increase of 14 percent and accounting for 8 percent of the nation's total.

In terms of foreign capital, 280 internationally funded companies from Australia, Singapore, the United States and the United Kingdom set up operations in Pudong in the first half of this year, focusing on bulk commodities, the healthy food trade and biomedicines.