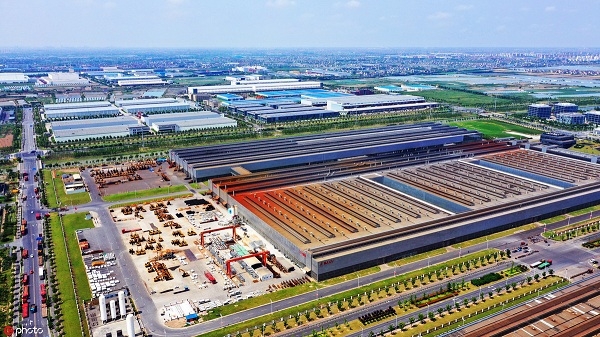 An aerial view of factory buildings in the Lingang area is seen in Shanghai on June 8, 2019. [Photo/IC]

Forty-five Nobel Prize laureates and 22 other world-class award winners will participate in the second World Laureates Forum in Lingang area, a newly added part of the China (Shanghai) Pilot Free Trade Zone, from Oct 29 through 31.

Around 100 academicians and leading scientists from home and abroad will also participate in the annual event, which is aimed to serve as a platform for scientific cooperation and applications to address important issues such as human health and environmental problems.

The forum was launched last year by the Hong Kong-based World Laureates Association (WLA) and jointly held by the Lingang administration committee of the Shanghai FTZ, the Shanghai Association for Science and Technology, the State-owned Lingang Group, and WLA's China center, which is under preparation of establishment.

Summits focusing on the areas of artificial intelligence and 5G, integrated circuits, gene and precision medicine, innovative drug development and translational medicine, cancer and tumor, medical imaging technology, brain science and cognition, hydrocarbon bonding organic chemistry, new energy and sustainable development, and fintech will be held during the forum under the theme "technology, for the common destiny of mankind", the organizers said during a media briefing on Saturday.

Chen Jie, deputy secretary of the Party committee of Lingang area of the Shanghai FTZ, said Lingang's recent inclusion into the FTZ demonstrated China's resolve to building itself into an all-around open economy.

"Lingang will be fully integrated into the global innovation network to continuously increase the city's openness of science and technology innovation and enhance the city's innovation strategy," he said.

Roger Kornberg, WLA president and a winner of the Nobel Prize for Chemistry in 2006, said the association has defined two important purposes: to support basic research and to fund and encourage the work of young investigators worldwide.

"It's important to remember the 45 Nobel Laureates and 22 winners of other important prizes, such as the Turing Award for computer science, the Fields Medal for mathematics, represent the past. These are people who are mostly of my age or even older, and their work is done," he said.

"WLA, however, is focused upon and primarily concerned with the future. The emphasis of basic science lies in the interest in the future," he added.

"All of the leading laureates shared a common viewpoint: Communicating with the scientists of the future generations is as important as winning a Nobel Prize," he said.