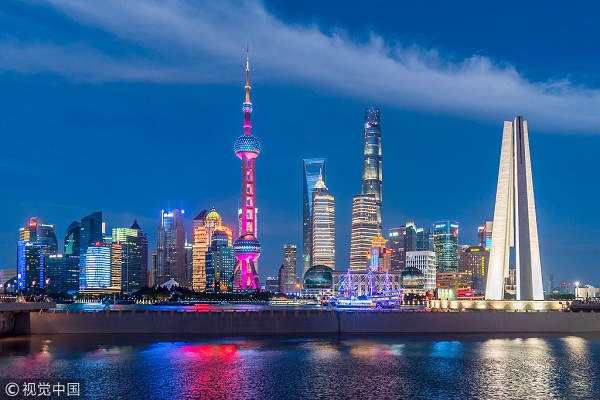 Bright colors glow and reflect on the river in this night view of the Bund in Shanghai. [Photo/VCG]

BEIJING - China's State Council, or the cabinet, has issued an overall plan for the new Lingang area of the China (Shanghai) Pilot Free Trade Zone.

The new area will be set up to the south of Dazhi River, east of Jinhui Port, and south of Xiaoyangshan Island and Pudong International Airport in Shanghai, says the plan.

The district launched first is to cover an area of 119.5 square kilometers, it says.

According to the plan, the new section will match the standard of the most competitive free trade zones worldwide and implement opening-up policies and systems with strong global market competitiveness.

The new area will facilitate overseas investment and capital flows and realize the free flow of goods, according to the plan.

The area will be built into a special economic function zone with global influence and competitiveness, to better serve the country's overall opening-up strategy, it says.

By 2025, the Lingang area will have a relatively mature institutional system of investment and trade liberalization and facilitation. By 2035, it will be built into a special economic function zone with strong global market influence and competitiveness, becoming an important platform for the country to integrate into economic globalization.

The area, administered like a special economic zone, will establish an institutional system with its focus on investment and trade liberalization.

It will be supported in promoting investment and trade liberalization and facilitation, including free flow of investment, trade, capital, transportation and employment, the plan says.

According to the plan, a tax system and policy with international competitiveness will be implemented in the area.

Income tax shall be levied at a reduced rate of 15 percent within five years from establishment for qualified enterprises engaged in manufacturing and R&D in key fields including integrated circuits, artificial intelligence, biomedicine and civil aviation, says the plan.

China will study and implement subsidy policies for the balance of personal income tax on overseas talents, and explore tax policy arrangements for pilot free trade accounts under the prerequisite that they do not lead to tax base erosion and profit shifting, it says.

The area will improve risk prevention and safety supervision and set up an open industrial system with global competitiveness, according to the plan.

It will strive to become a business cluster for international businesses, cross-border financial services, frontier technology research and development and cross-border services trade, and speed up the industrial upgrading of existing companies.

The plan says the new area will be granted greater administration power for self-development, self-reform and self-innovation, and regularly promote its experience to spearhead a new round of reform and opening-up of the Yangtze River Delta.