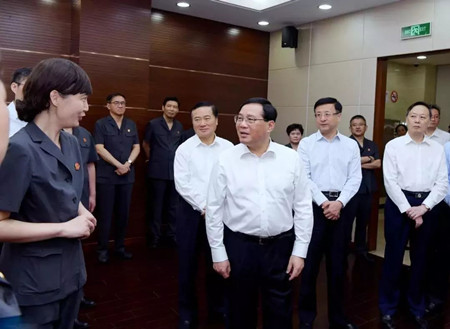 Secretary Li toured the major institutions around the SHFTZ and stressed that SHFTZ should further implement national strategies to become an advanced trading institution, push the integrative development of the Yangtze River Delta region and promote the implementation of the Belt and Road Initiative.

The delegation's first stop was at the Shanghai Intellectual Property Court where they learned about the legal protection of intellectual property. The court previously released a series of suggestions on how to best protect and stimulate innovation in the sector. It accepted and heard more than 7,000 intellectual property-related cases since it was founded in 2014, and about 14 percent of them involved foreign interests, which improved its reputation among foreign enterprises.

Make use of development opportunities

Secretary Li came to the trading hall and learned about the operation model that integrated the exhibition and sale of artwork. He also took part in an in-depth discussion with related officials on how to promote copyright services and development the cultural creativity industry.

Accelerate opening up and promote goods and service trades

A meeting was also held where Secretary Li heard a report on the SHFTZ’s development in the last five years. Li spoke highly of the SHFTZ's achievements in institutional innovation in the fields of investment management, trade supervision, financial opening and innovation, and government administrative system. The SHFTZ attached great importance to conforming to international prevailing standards and the roles of market entities, becoming a new driver for the economy of Shanghai.

Secretary Li stressed that the SHFTZ should support the national opening-up strategy and accelerate the implementation of the "100 rules for Shanghai's opening up". It was also highlighted how the zone should promote opening-up in major fields, strive to develop intermediary trade, offshore trade, facilitate the integrative development of goods and service trades, and build a fair, uniform and efficient market environment.

Secretary Li pointed out that the SHFTZ must strengthen the core competitiveness of industries, attract high-end resources and further develop strategic and leading industries. To become a competitive industrial highland, the SHFTZ should develop environment-friendly industries with high productivity, such as integrated circuit and biological medicine. The SHFTZ should play a leading role in the integrative development of the Yangtze River Delta region by strengthening its cooperation with other cities and pushing the implementation of latest reform and innovation results forward.

Secretary Li said that to support the implementation of Belt and Road Initiative, the SHFTZ should build a new platform for international cooperation and a function as a hub for market collocation, pushing forward communication in terms of trade, technology and culture between countries and regions involved in the Belt and Road Initiative.