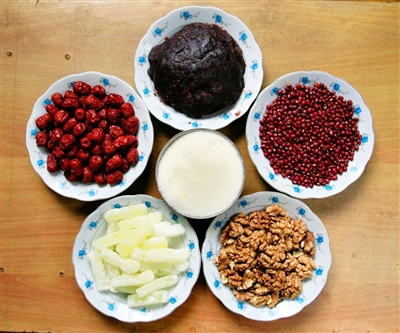 Sanlin crackable melon is a strange cuisine name for its crunchy texture. It was originally planted in the Qiao’s Garden and Kwan-yin Temple areas, becoming famous in the Qing Dynasty (1644-1911).

Difficulties in production and transportation made the melon quite expensive, causing the species to diminish in 1976. Fortunately, the Shanghai Agricultural Institute later retrieved this melon from Japan, allowing Shanghai to taste this rare melon once again. It is not easy to buy authentic Sanlin crackable melon due to its limited production.

Sanlin pickled vegetables were first created in the Wantai Pickling Workshop during the late Qing Dynasty. Tiny pickled cucumbers were used as tribute for the royal court. The cucumbers are punctured, soaked in a tasty sauce and sun-baked before being served.