Shanghai to build up its port to serve China's import

Shanghai is striving to build up its port to serve the import business of the entire country, said Shen Weihua, deputy director of Shanghai Municipal Commission of Commerce, on Aug 1.

This task is one of the top priorities stated in the 100 new measures released in July to further expand Shanghai's opening up. Building up the port is considered of great significance for Chinese companies.

In order to achieve the goal, Shanghai will improve its infrastructure such as Yangshan Deep-water Port and Waigaoqiao Bonded Area to attract commodities from all over the world.

The city is continuing to push forward the construction of an integrated website for government services, which allows foreign trade procedures such as administrative approval, licensing, certification, and customs declaration to be done in a single window. The "single window" has served over 200,000 companies to date..

Finance is considered an integral part in building up the port. Shanghai will use it advantages as a financial center to develop more types of financial products to satisfy the various needs of domestic companies.

A more efficient, convenient and standardized mechanism will be launched in Shanghai to make it easier for Chinese companies to do import business.

In fact, Shanghai has already laid the foundations for building up its port. According to statistics provided by Shanghai Customs authorities, the number of goods imported by the city's foreign trade companies hit a record high in 2017, with the total value reaching 1.9 trillion yuan ($275.4 billion), second only to Guangdong province in the country.

The city has gathered together a batch of leading companies in the industry, which also have a strong resource allocation capacity, strong market competitiveness, and strong social influence. There are now more than 30 companies in the city whose import value exceeds 10 billion yuan.

Qu Pinnan, quality director at the Shanghai Shine-Link International Logistics Co, a service provider of Fortune 500 companies such as Apple, Bosch and Sony, said they have confidence in Shanghai reaching its goal given that the tariff revenue of Shanghai ports accounts for a quarter of the country's total at present. 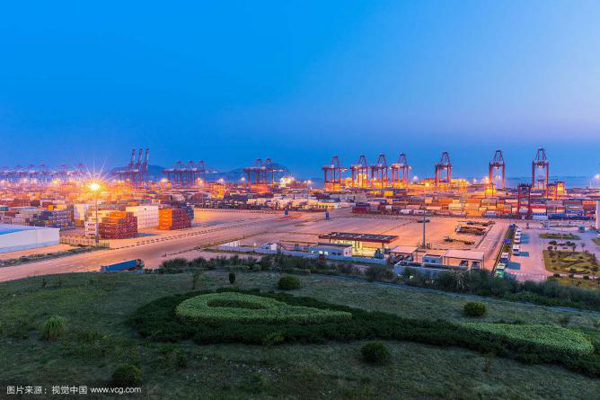 Yangshan Deep-water Port in Shanghai is building a fully-automated container terminal that can handle a maximum of 6.3 million TEUs (20-foot equivalent units). [Photo/VCG]