The Mori Building Co, a Japanese property developer that developed the Shanghai World Financial Center (SWFC), is looking forward to strengthened cooperation with Pudong New Area, Shanghai, said Shingo Tsuji, its president and CEO, during his visit to Pudong on July 20.

The 492-meter SWFC, which opened in 2008, is a business, culture and entertainment hub in Pudong and forms a distinctive part of the iconic Pudong skyline, which also includes the Oriental Pearl Radio & TV Tower and the Shanghai Tower.

Shingo Tsuji said that the center's first decade has been a success and thanked the Pudong government for their support, and hoped that the company could use its resources to make more contributions to Pudong's development.

Weng Zuliang, Party secretary of Pudong, welcomed the Japanese delegation and highlighted the importance of the building to Pudong, saying that it attracts around 2 million visitors every year and provides office space to many notable financial institutions. Cultural activities in the center were also widely acclaimed.

Weng also vowed that Pudong will continue to improve its services and create a better business environment for Chinese and foreign companies. 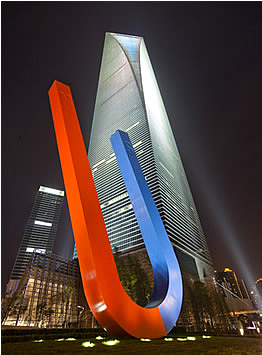