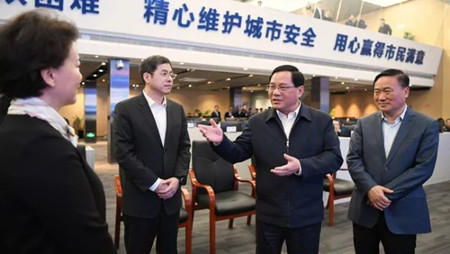 Pudong should ramp up more efforts in innovation, and continue to play a leading role in reform and opening-up in the country, noted Li Qiang, secretary of the Shanghai CPC Municipal Committee.

"Pudong's development is impossible without reform, innovation and opening-up and Pudong should be persistent in taking a leading role and set a model for other districts to follow."

Li made the remarks during a visit to the Pudong district on April 18.

Pudong's economy, and especially that of the service industry, went well in 2017 and showed an annual economic growth of 8.7 percent.

Li highly acclaimed Pudong's achievement during the past 28 years, saying that it formed an integral part of China's reform and opening-up and modernization.

He went on to stress that being opened-up is one of the biggest advantages of Shanghai, and that therefore Pudong should put opening-up in the first place and actively carry out appropriate strategies and accelerate reform of its economic system.

Pudong should also try to innovate its service industry and upgrade the function of the market to access global resources, according to Li. Moreover, it should establish a global market mechanism to boost trade and investment.

Li also affirmed intelligent monitoring of the area when he visited Pudong's city operation center which uses high-end information technology for that purpose. One of the features of the system is that it can immediately provide the latest information about the city's communities, transportation or number of tourists.