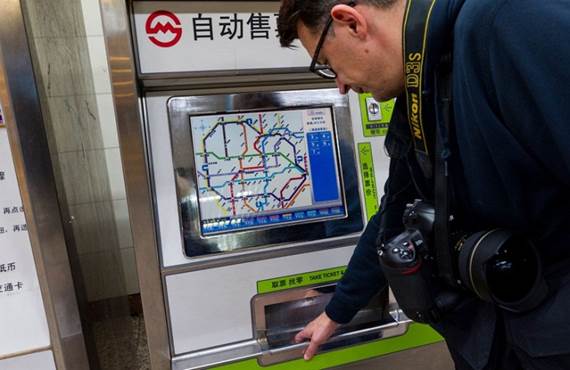 Similar to other metro systems in the world, Shanghai Metro adopts a distance-based fare system. Ticket fares range from 3 yuan for distances under 6 kilometers, then an additional 1 yuan for each 10 kilometers.

It is advisable to purchase tickets from a ticket vending machine which automatically calculates the fare according to the destination station specified. Here are some points you may find useful:

Users of the Shanghai public transport card (SPTC) can get a 10% discount after paying more than 70 yuan every month. The discount is only applied for journeys after the payment.

Senior citizens over 70 years old can take the metro for free (except during peak hours, 7–9 am and 5–7 pm on weekdays) by using their social security cards (also RFID-embedded) at a special gantry at each metro station. 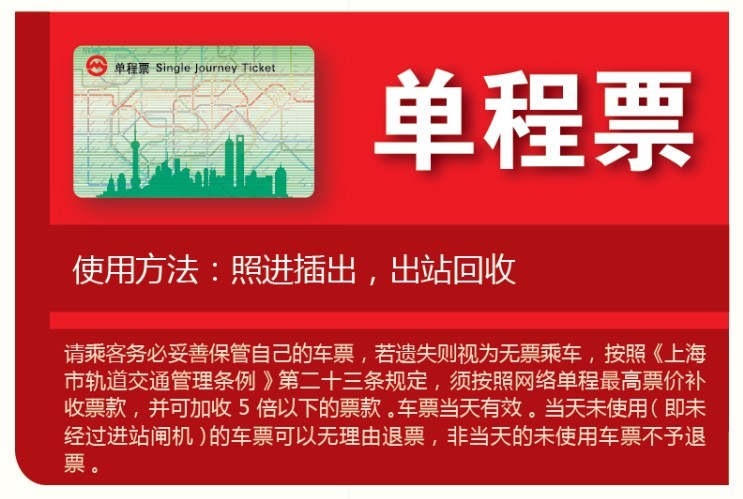 Single-ride tickets can be purchased from ticket vending machines or at a ticket window. Single-ride tickets are embedded with RFID contactless chips. When entering the system you tap the ticket against a scanner above the turnstile, and on exit you insert the ticket into a slot where it is stored and recycled.

Single Ticket, made of a thin IC card, refers to a ticket with a certain amount of money which can be used once in the metro network at specified stations within a stipulated time. Adopting the approach of "swiping for boarding and inserting when exiting”, the ticket will be recycled in the ticket checking machine at exit gate for reselling in ticket offices or ticket vending machines later. 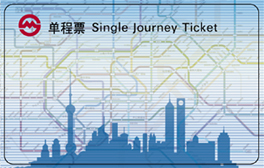 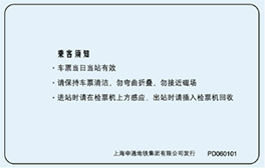 Currently, One-Day Pass is available at all stations on the Shanghai Metro. The fare for One-Day Pass is 18 Yuan. The day ticket holder is entitled to unlimited transportation times in all metro lines (not including maglev lines) during operating time within 24 hours after swiping it at the entrance gate for the first time. 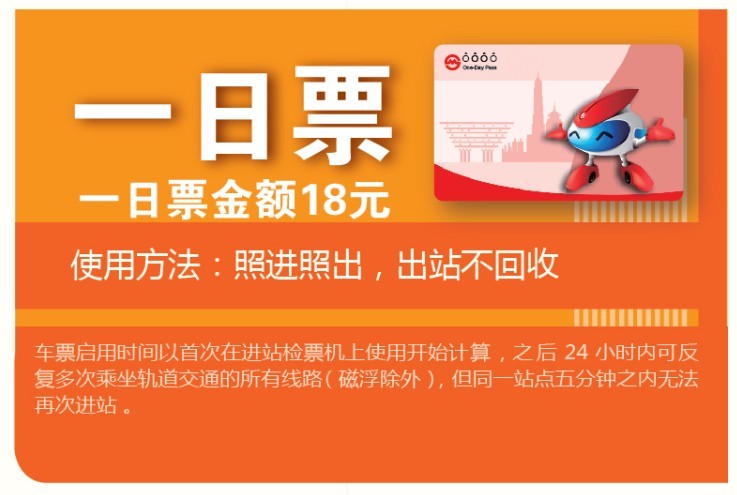 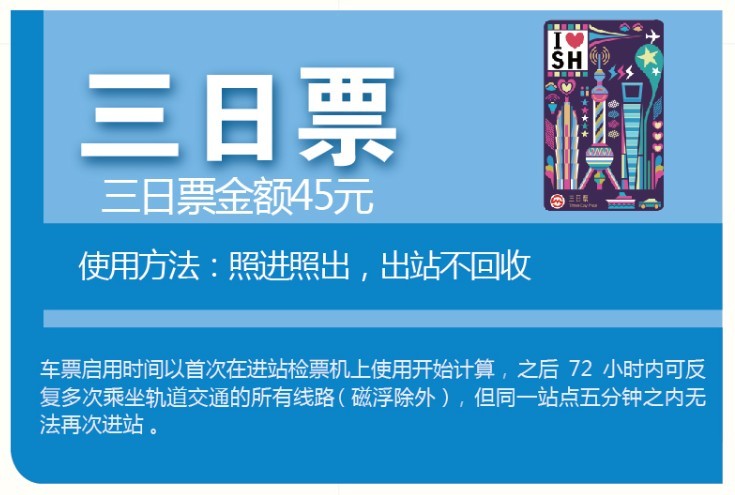 Currently, Three-Day Pass is available at all stations in Shanghai Metro. The fare for Three-Day Pass is 45 RMB. Three-Day Pass holder is entitled to unlimited transportation times in all metro lines (not including maglev lines) during operating time within 72 hours after swiping it at the entrance gate for the first time.

A series of “I Love Shanghai” Three-Day Pass, designed by @特攻小笼, has already issued three sets, namely, Lujiazui, Xujiahui and the Bund respectively. 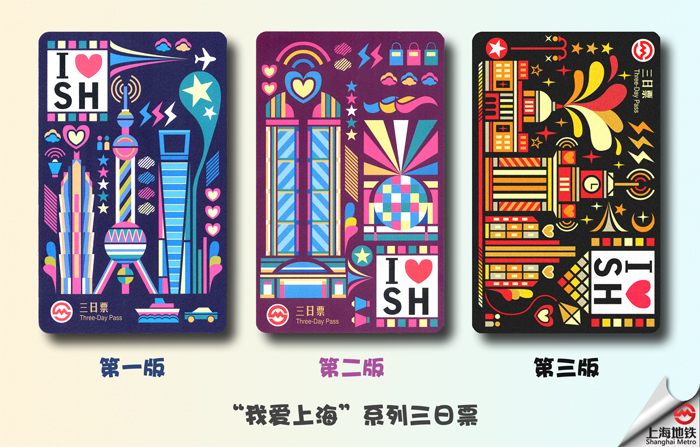 Usage: swiping for boarding and exiting, ticket holder may keep the ticket afterwards.

Note: The loss or man-made damage of the commemorative ticket shall be deemed as an invalid ticket, subject to the same handling method as a one-way ticket. 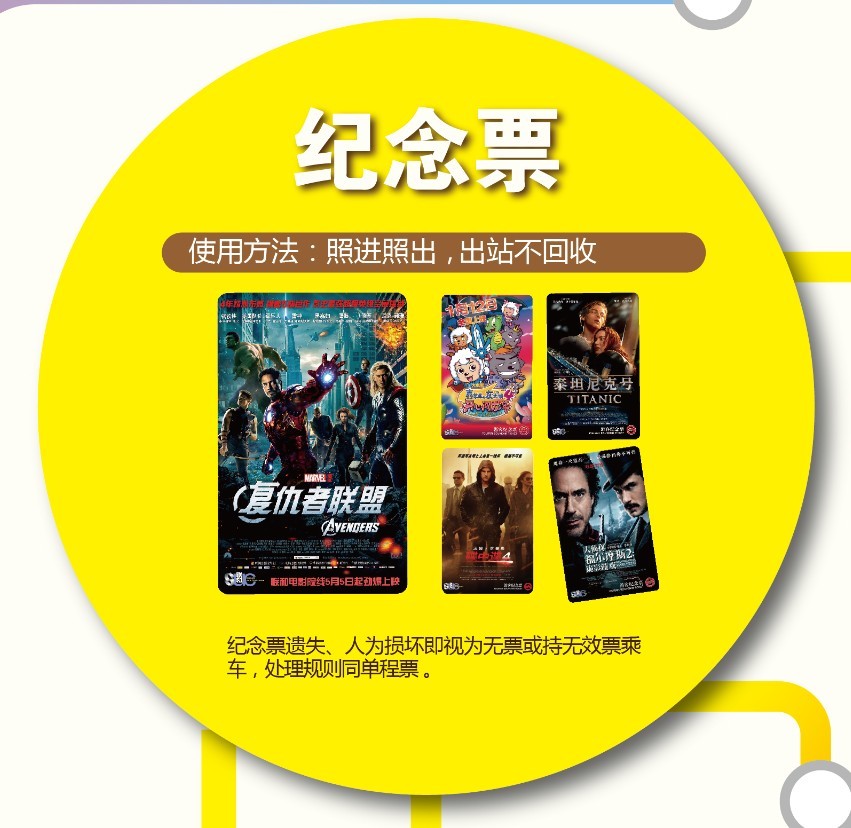